Two weeks ago, I spoke at CharityComms’ Stats that Matter workshop about meaningful measurement of media/PR. It went well, I thought, and I particularly enjoyed talking about communications to communicators – unsurprisingly, that combination makes for a most engaged audience!

Scarcely a week later, I received another invitation from CharityComms – this time, to be part of the opening panel for a workshop on reputation management. Considering both, the conversations around my last session and my personal work history (I’ve had the privilege of working with some big brand campaigns and charities, including in coalitions, crisis comms and reputation management) I was pleasantly surprised at the timing of this request, so soon after my last engagement with CharityComms. But as CharityComms told me, there was a slightly sensitive background to the invitation: a previous panelist had made a considered decision to decline the invitation, as he didn’t want to be part of an all-white, all-male opening panel.

Suddenly, my acceptance of the invitation to join the panel had acquired deeper connotations: of gender politics, of racial bias, of affirmative action vs tokenism. I must confess, the controversy took some of the pleasure out of being invited to join another CharityComms event, and I did pause to consider the symbolism of my speaking at the panel. I was no longer speaking (only) as Namrata Chowdhary, communications professional. I was now also the token ‘brown girl in the ring’.

It seemed the discussion on reputation management had already begun! So, typically, I fell back on professional, process-driven, framework thinking to guide my decision on whether or not to join the panel. I used the three As frame, introduced to me by a wise (woman) mentor, to shape my thinking on how this communication would reflect on my own reputation, as well as CharityComms’: I had to consider Authenticity, Audiences and Audacity. (I will be using the same frame to discuss reputation management on the panel, so do join the event to see how charities can assess, strengthen and protect their reputations.)

The ‘brown woman’ label, although inarguably appropriate, is nonetheless a relatively new one to me. I moved to Europe in 2006, before which I had lived and worked in India. There, I was simply a comms professional. Yes, I was conscious of being treated differently for being a woman, and yes, I spoke up on women’s issues. But either because I grew up in an all-woman household, or because I worked in the charity sector where the gender balance is far more balanced than in the corporate world, I didn’t feel I needed the ‘woman’ label any more than I needed to wear the ‘brown’ one.

Perhaps it is this reality – the fact that these labels are consciously acquired, that I do have a body of experience in the developing world, as well as the perspective of a globalised expat, and am quite literally an immigrant citizen of the developed world – that authentically validates my place on the panel? Yes, I decided, I do consciously represent a different perspective, and yes, it is indeed important that sector-wide discussions on reputation be… well, coloured… by this perspective!

Liam Barrington-Bush, the panelist who declined, makes a very valid point about opening sessions at day-long workshops framing the discussion and setting the tone for the rest of the workshop. But equally, the audience for any discussion, and the interaction they have with the panel, can direct the flow. Where are you coming from, what are the values that you will bring to the discussion, and how will you view the panel I shall join? All of these are critical to us, especially now that the panel composition has been questioned, critiqued and responded to.

From an audience perspective, I think my presence – and perhaps more importantly, my input – could serve as an important reminder: to those in the room, that there are perspectives beyond the obvious, ‘white male led’ homogeneity; and, more broadly, a reminder of perceptions, perspectives and reputations being open to far wider nuance when your audience, and therefore the discourse, is rooted in a global context.

For communications to be progressive, it is important to encourage audacity: the audacity to challenge ‘spin’, to unhesitatingly present the truth – and versions of the truth! – so we can discuss, debate, and together construct an authentic expression of our values. I was glad to see that CharityComms had encouraged, discussed and responded to Liam’s challenge. I was even more glad to see they had created this constructive space to continue the discussion. I add my voice to the call for greater recognition that expertise comes in diverse forms, and urge you to do the same. Be more audacious about challenging stereotypes, but also about calling out tokenism where you see it replacing homogeneity. Let’s move our sector towards meaningful, constructive inclusiveness.

So yes, I have put aside my concerns around my labels (authentic as they are), and accepted the invitation to join the panel. I will speak about applying the three As framework to reputation management, and will do so in full recognition – and with utmost humility – that I represent a wider perspective, and will serve as a reminder of our diverse audiences.

Join me on the 21st… and I urge you to be your audacious best on the day! 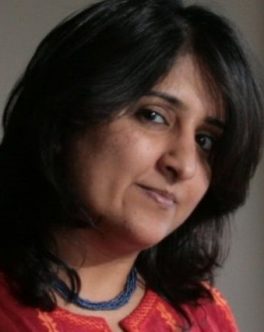 Namrata is a communications consultant who spent 15 years working with international campaigning organisations before setting up a small independent agency, Cause Impact, committed to making change through communications.