I started at Amnesty UK as online communities editor nearly two years ago now. When I started we had a Facebook page, a Twitter account, a newly launched community site – ProtectTheHuman.com – and not much else. At this point we really didn't have much of a strategy; our interaction in these spaces had been sporadic at best.

Thankfully, with the launch of ProtectTheHuman.com in September 2008 my role was created and the resources finally existed to start managing these communities in a much more focused manner.

In the early stages we worked with one of our partner agencies, Made by Many, to start formalising our approach to social media and community building. One of the first tasks we completed together was an audit of all our existing networks. We are lucky to have an amazing activist constituency and many of these groups had already made their way online.

Upon completing research on where these existed, we were then able to both understand and map these networks more fully. From looking at how and where our activists and supporters were using social networks already we were able to focus our resources on the places we felt we could have the most impact: Twitter and Facebook.

Our next step was to jump in. Up until this point we'd been asking a lot of our followers, without giving much back. If this was to work we really needed to start talking to them and making them part of our story.

To do this, we went from relying on RSS feeds of our press releases to populate our social presences to posting numerous updates throughout the day. We also started responding to questions and getting more involved in conversation. This consistent, sustainable approach led to a rapid growth in our audiences on Facebook and Twitter and within a year we had increased their size by over 400%.

Throughout this period we were weaving the narrative of our campaigns and actions into our daily updates, but we were also starting to pilot social media in campaigning on specific projects. In these cases the ProtectTheHuman.com community site formed our central campaigning hub, in many cases the place where people went to actually take action.

Early forays into incorporating social media into our campaigns had mixed results, and each time we carried out a social media aspect of a campaign we analysed its impact in detail. It was important that we were able to demonstrate what worked and what didn't work, both for future campaigns, and to prove ourselves to the rest of the organisation.

From these insights, and as confidence grew within Amnesty UK, we were able to apply all we'd learnt from the last year of campaigning into one key campaign aimed at Shell's activities in the Niger Delta.

This campaign offered us the perfect opportunity to use social media for campaigning effect. When trying to figure out how best to tackle such a large company as Shell we realised that they had a Twitter account. We formulated a plan to approach them via this account, asking our followers and activists to send them a message, requesting a web chat on the Niger Delta and human rights on Shell's own site.

We were fairly astonished when, after only around 300 messages and 13 days, Shell agreed to our request. We quickly laid plans to run a parallel web chat alongside Shell's, to ensure they were not just allowed to use this as a PR opportunity.

To keep our supporters engaged in this campaign we asked that they join the web chat and submit questions in advance to be answered by Shell. On the day, 445 people registered for Shell's web chat and they answered 60 questions.

Our own web chat had 150 participants and an amazing discussion of Shell's arguments was initiated by both our general supporters and the experts we had invited to take part. We were also joined by a group of people from the community in the Niger Delta, who were amazed that a group of Shell executives were actually answering their questions.

The most incredible thing about the web chat was not only that it opened up new channels of communication between us and Shell, but that it managed to get them to answer questions from us where they had previously refused. In this way, it was a valuable exercise, making Shell aware of the public pressure on them to change their practices, and also forcing them to be more transparent.

After this point we knew there would be a lull in the campaign as we assessed what was the best approach to take next. From previous experiences we had learnt that we needed to keep active in order to sustain interest in a long term campaign. 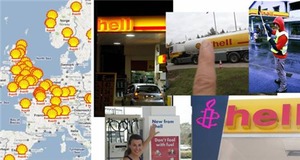 We started a project using Google Maps to publicly shame Shell and to collect user generated campaigning content. We asked our supporters to take photos of themselves at Shell petrol stations, covering the S of Shell to turn them into Hell Stations, before plotting the photos on a public map. We ended up with hundreds of photos in scores of different countries around the world, a real snapshot of activism on this issue.

This project led us neatly into the most recent phase of the campaign: fundraising for an advert targeting Shell's shareholders on the day of their AGM, to be placed in a national newspaper. This fundraising ask also spanned our entire communication properties. It was housed on ProtectTheHuman.com and promoted through our main email list as well as social networks.

The response was incredible: 2,000 people helped us exceed our target amount, shared the campaign with their friends and got involved. In total the donation page received over 25,000 unique views and received more than 230 comments.

Turning possible crisis into a strength

On the day itself we ran into a hiccup, which turned out to be a blessing in disguise. The Financial Times, the paper we had chosen to run the ad in, pulled our campaign at the last minute and we had to find alternative placements in the Metro and Evening Standard.

When we revealed the location of our ads, donors immediately started to ask why it wasn't in a national paper as we had promised. Our media teams were able to make the decision to issue a press release about the rejected ad, and very quickly the story of "the ad the FT didn't want you to see" was up and running on hundreds of blogs and had innumerable social network mentions.

A big factor in helping this spread was also the commitment of our campaigner on Shell, who, already active on Twitter and her own blog, was able to incite her audience to spread the word with incredible efficiency. This taught us one very valuable lesson: getting key members of staff involved in your online communities can be incredibly powerful.

Since their AGM Shell have agreed to meet us, promised to release information we've requested and reduce gas flaring in the Niger Delta.

Overall, we feel the campaign has been very successful, not just for its impact, but also for its ability to involve people: 32% of donors to this campaign had never given to Amnesty before.

There are many reasons we were able to make this happen, firstly it was the "perfect storm" of the right target at the right time, but beyond this there are a number of key things we have noticed that have helped it succeed.

Perhaps most importantly, this campaign showed that Amnesty UK trusted the communities it had developed and their power to effect change in relatively new ways.

Personally, I believe that it is this trust (along with a good dose of common sense) that ultimately will lead to successful online campaigning in future.