Any time, any place, anywhere – mobile, the Martini channel

The mobile phone is 39 years old. The first text message was sent in 1992. Since I started out in digital 12 years ago, I think every year has been dubbed the "Year of the Mobile". But there’s no denying, with the leaps in technology and bandwidth, phones will soon be able to do everything our computers can, only faster.

With that comes a change in attitude. They keep us permanently switched on, make us impulsive and ready to interact at the drop of a hat. The average UK consumer now sends 50 texts per week with over 150 billion text messages sent in 2011. Almost ninety minutes per week is spent using a mobile to access the internet.

As a result our media consumption is no longer linear. We’re on social networks whilst watching TV, texting whilst reading a magazine, checking emails whilst in meetings. And how much we hang out with our mobile varies as the day goes by. Global research by Ericsson's ConsumerLab showed we’re already on it in bed, ramp it up on the commute, stay consistent throughout the day, drop down during dinner, then back up again in the evening before retiring for to bed with it. 39% of mobile users even admit to doing so in the loo.

From recruitment to retention and upgrade, our strategies should be taking greater advantage of this behaviour. Let’s take a look at how:

Acquisition
Mobile search is up 400% since 2010, according to Google, and half of those who see a mobile ad take an action (particularly impressive when compared to the 0.06% average click rate online display gets). But where things get really interesting is how mobile interacts with other forms of advertising. 51% of mobile users have done a mobile search after seeing a TV ad, 41% after looking at a print ad, and 34% after spotting a poster or billboard. And that’s reflected in fundraising. TV response channels have shifted since 2007, with text up 100% and online up 62%.

Marketing is all very well but what are we getting them to do once they reach us?

From the removal of VAT in 2009 to network charge reductions and innovations, text donations are establishing themselves firmly in the fundraising canon. Back in 2009 nfpSynergy predicted by 2014 £96 million a year could be raised by text message. That felt ambitious until Comic Relief raised £15 million that way. But mobile is about more than cash donations.

Cymba, supplier of mobile marketing services, report that conversion rates to regular giving are 8 – 20% and those who give more on the initial text cash ask, and are contacted relatively quickly, are the most likely to convert to committed giving. With the revolution in other mobile payment formats (contactless payments, phone to phone money transfers) our digital wallets can only add more to cash and regular giving.

More than two-thirds (64%) of smartphone owners are now using their mobile to shop online, a number that has quadrupled in just two years. How mobile friendly are our ecommerce and virtual giving pages? Can supporters pay quickly in a matter of clicks using, say, PayPal or by text? What about a text “thank you” or a text to the receiver sharing the gift?

Telethons like Comic Relief show the potential of mobile as a donation tool. But beyond getting your participants to give on the day, mobile provides a quick way to promote your event and generate interest. Make your online registration fully compatible and the entire recruitment process is mobile. Then there’s the potential of using location apps such as Foursquare as an integral part of your whole event.

Putting the power literally in the hands of the user, mobile apps, as demonstrated by the likes of One.org and Amnesty, are a potentially powerful advocacy tool. Apps allow you to create a rich experience for your supporters, with direct links to petitions, tools to contact policy makers and so on. But we can keep it simple too, with SMS and MMS campaign alerts, or a text to pledge. Like an X Factor vote but more life changing.

Our supporter journeys are where the Martini effect really kicks in. We can deliver extraordinarily rich content directly – and quickly – through the channel people used to engage with us.

Social networking is one of the biggest uses of mobile, with an estimated 30% of everything posted to Facebook and 40% posted to Twitter coming from mobiles. But beyond that, there’s the exponential rise of tools like Instagram for photo sharing, tools that give us the chance to bring supporters closer to causes with live updates from the field. Or we could use SMS and MMS to the same effect; after all there’s as much space to talk in a text as a tweet.

The average smartphone user will visit up to 24 per day. But poor experiences are common – 83% claim to have experienced a problem buying something on a mobile site. Mobile traffic to websites is typically 10 -12% (though we’ve seen much more than that, particularly with healthcare charities) yet the majority of websites are not mobile enabled.

Developing things in responsive design means your site will be accessible to users on any screen, be that the myriad of smartphones and tablet sizes or laptops and desktops.

The mobile phone is rich with potential. It’s the one thing we always have on us. It’s democratic, it’s spontaneous and it’s intimate. With smartphone ownership growing, it’s a whole multi-media platform on its own. But it’s also the thing that can tie all our other channels together. The value is in integration, embedding mobile across all your fundraising and communications strategies. And to keep that Martini analogy flowing: could mobile be “the right one” for your organisation?

A quick post script for all of you younger than me: here’s a particularly classic example of that ad campaign: 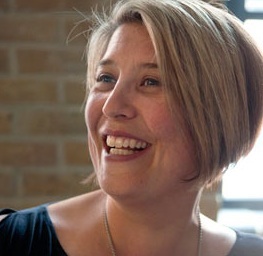 head of digital, The Good Agency

Charlotte oversees digital at The Good Agency and is solely responsible for digital planning and strategy for fundraising, campaigning and communications.