Are charities taking full advantage of the ever-changing web?

The media landscape has changed and charities have been working hard to adapt to it and take advantage of the opportunities it provides, whether that’s through online donations or providing greater transparency about where the money goes. As a digital and brand communications agency, we wanted to understand how the sector was dealing with the ever changing web, and importantly, if it was only the charities with money that were able to take advantage of it.

That’s why we produced research, and our subsequent report, looking at the online trends, observations and best practice across the charity sector. As there are over 160,000+ charities in England and Wales alone, we knew we couldn’t review them all – so instead we looked at a random sample of charities across England, Wales and Scotland, and put them into a series of categories, including their financial income and the type of charity e.g. children, animals, etc.

We wanted the research not just to measure the differences between charity websites, but also the extent to which charity websites are campaigning – which led us to some interesting results around the use of social media (or lack of). In this area there have been some noteworthy developments, which prove that the same channel can be used in many ways depending upon the brand and the message.

For example, Amnesty International makes excellent use of Twitter as a means of communicating to journalists, while The Red Cross has implemented a strategic use of Twitter to inform people of emergencies around the globe, such as the fires in California. However, there is a sense that many charities are still struggling to work out how social media can really add benefit to the wider organisation beyond marketing to, often, relatively small numbers of followers or ‘"riends".

Across the categories we investigated How do different charities use their website to campaign? Dean Russell discusses communications agency Precedent's, recent research, site specifics, charity messaging, calls-to-action, involvement and innovation e.g. use of social media – we found there was a marked difference in activity based on income (see chart) with, not surprisingly, the £10m+ charities having a far more robust and rounded web presence than those with a lesser income e.g. £100-£500k. When it comes to innovation we might have expected to see the smaller charities taking more advantage of this as often the tools are free, but the research unfortunately showed the opposite.

Overall, our research showed charities are finding it difficult to campaign effectively online, especially via their main website. Whilst charities were clearly passionate, the websites often didn’t show many signs of a deep strategic approach to their use – often acting only as a ‘brochureware’ site. For example, calls to action – for people to donate or get involved – were often missed from sites, especially once the user goes deeper than the home page.

Charities are also not asking others to promote their message further e.g. online communities were not being properly nurtured, and so the opportunity to create "online ambassadors" missed. This is a shame, especially for the smaller charities with smaller communications teams.

We also found some basic errors across the review; in particular, a lack of direct requests for donations, or links to donation systems such as JustGiving. Frustratingly, there was a lack of online accessibility – the ability for people with disabilities to view the web. The latter point is something that charities should be addressing as a priority, especially as they should be leading the way in making sure vulnerable in society are not sidelined.

The report itself goes into more detail of our findings across lots of areas from communications, branding and best practice, and overall we were impressed by the sector in using the web as a tool for communications. Through the report we tried to pull out the key activities charities could do to improve their web presence and hopefully to spark debate about what best practice really is in the sector.

Our findings weren’t damning by any means, but they do highlight that the sector is struggling to deliver consistently. What might seem to be small recommendations in the report may turn out to have big payoffs for charities through improving reach and income. The report is free, and we hope that readers will pick up at least a few key points to move forward with, and that it might spark a wider discussion on best practice for the sector. 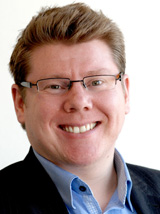 Dean is a digital communications strategist, speaker and writer. He has worked with household name brands across most sectors including health, education, technology, consumer and government including start-ups and SME's.