Bringing tangibility to your messages

But are they worth the money? Do they work?

The answer isn’t a simple yes or no, I’m afraid. It depends on what your communication is trying to achieve, with what audience and through what medium. For example, the ubiquitous address labels that some charities use as part of their fundraising mailing campaigns might be perceived as cheesy and old-fashioned – but there is much evidence to suggest that they still have a positive effect on response rates. And as long as the ROI (return on investment) is acceptable, they will continue to be used.

But common sense tells us that this technique won’t apply across every audience, so charities need to think clearly about what exactly the "tangible" elements of any communications are trying to achieve.

Here’s an example from the most recent direct mail and door drop campaigns by the Royal British Legion.

These (see above) are part of the contents of a personalised mailing I received to invite me to join the remembrance campaign this year and to consider making a donation. The tangible elements came in the form of a lightweight wooden cross with a poppy attached and a card explaining about the new garden of remembrance being opened on Armistice Day.

Recipients are invited to complete a message on the cross (or online) and send it back to the charity. The cross would then be placed with others received in the new garden of remembrance. As a poppy wearer, this mechanism appeals as it gives me the opportunity to tangibly mark Remembrance Day and all that this means. 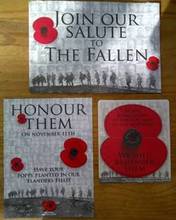 I received this second communication (see right) the following week as a generic door drop (the ROI of which may be questionable but that’s not the point I’m making here). As a non-personalised piece, the charity will know less about the recipient and is probably less sure of the likelihood of a positive response and donation.

Therefore, the core messages of remembrance and support for today’s service personnel are similar but the mechanic is different. The charity invites me to complete a cardboard poppy with my message and return it to support the planting of a field of poppies near Ypres, site of some of the most significant WWI battles. The tangibility in both of these approaches actually goes beyond the cross and the cardboard poppy, which is why I think it’s more powerful:

How to be tangible

First and foremost, tangibility as a technique is useful to bring a communication to life, to make it more real and more relevant to your audience – and to drive action. With that in mind, here are a few tips to getting the most out of this technique:

What would you add?

Trustee, Director, volunteer and champion of marketing and communication ideas for not-for-profits and ethical business.