Broadcasting on Periscope: what we’ve learned about live streaming

In 2015, our membership network was rapidly growing. While we were excited to welcome new members, we had a problem.

How do we accommodate all the new people who want to attend our events, especially those who live outside of London, or those unable to physically attend. Event space is limited and people’s time is precious. We wondered, was there a tech solution to our very analog dilemma?

After many experiments, including a failed test with GoToWebinar, we decided to try going live on Periscope, Twitter’s free live streaming app. In January 2016, we successfully broadcast our digital trends seminar to 41 people.

There have been hiccups along the way which we’re still working through, but generally, it’s working for us. Crucially, we’ve learned a lot. So, for those thinking about live streaming, here’s what we’ve learned about using Periscope to live stream events.

Periscope allows you to create public and private broadcasts. Private broadcasts are for a select group, while public broadcasts can be seen by anyone with the link. We always go private, because we broadcast exclusively to our members. Here are some things worth knowing:

The reasons to go public

Live tweeting at events: seven tips for avoiding the pitfalls 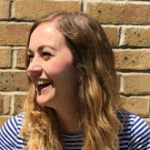 Harri is an events manager at Pancreatic Cancer UK. Previously she was the events manager of CharityComms for three years after having originally joined the organisation as events co-ordinator in March 2014 to co-ordinate, manage and run our series of events. Before this, Harri was the World Fellowship and events assistant at The Duke of Edinburgh's International Award Foundation.