Videos on a shoestring 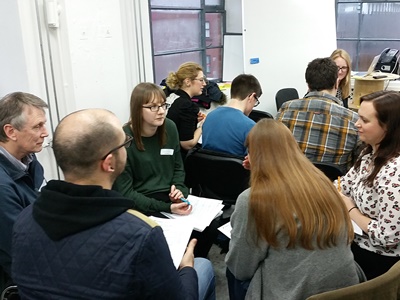 Video has become one of the most powerful forms of communication. Every day, one billion videos are viewed on Facebook, 12 million videos uploaded to Vine and hundreds of millions of hours of YouTube videos watched.

With these stats in mind, charities cannot afford to overlook this medium as a vital tool to engage existing supporters and reach new audiences. Creative Concern, Christians Against Poverty and University of Manchester all shared their top tips for producing engaging video content.

Chris has been producing films for charities for over fifteen years both in-house and as managing director of Creative Concern. His presentation showcased good practice, explored the pros and cons and demonstrated how ideas and planning make all the difference in making moving pictures a powerful part of your brand message and content strategy.

In 20 years Christians Against Poverty (CAP) has gone from one man with ten pounds to a nationwide poverty relief charity, with 1200 staff and volunteers and an annual income of over 10 million pounds. Chris looked at the key role video has played in engaging both supporters and service users, and the journey CAP has been on – from agencies, freelancers and iPhones to having an established in-house video team.

You could spend £10,000 on a video, but if you’re not telling a story then you will quickly lose your audience. Make the most of the emotive power of video, weave a compelling narrative through your film and a £100 video can be a success. Drawing on his experience as a video journalist, lecturer in filmmaking and now producer of film and imagery for The University of Manchester, David explored what makes a compelling story and how to construct one for video.

About the North West Group

The North West Group is a network of comms professionals working in UK charities and not-for-profit organisations in the North West of England.

Meeting three times a year in Manchester, each event focuses on a different comms topic with presentations, group discussions and networking. These events are a great opportunity to meet your peers, compare notes on workplace practices and share successes, ideas, challenges and inspiration. The group is designed to encourage networking and peer-to-peer support, sharing issues in a ‘safe’ and relaxed environment.