When SSAFA set out to mark the centenary of World War One (WW1) with a contemporary video of the marching song 'Pack Up Your Troubles’ we knew we had something special on our hands. But even we were surprised by how successful it was.

The song was at the centre of a two week integrated marketing, PR and social media campaign designed to raise awareness of SSAFA’s work, which resulted in 245 pieces of national and regional news coverage and 14,000 shares across social networks.

As the only national military charity in existence at the beginning of WW1, SSAFA wanted to use the centenary as a platform to raise awareness of its vital work supporting forces families during that conflict and its continuing support for the armed forces, veterans and their families today.

We decided to use the song Pack Up Your Troubles as the hook for our activity. The song’s lyrics about the bravery and optimism of troops going off to war are as relevant today as they were back in 1914. We knew, with the right creative treatment, we could align this message with our own ‘then’ and ‘now’ theme.

We created a video of the song, featuring celebrities, people SSAFA has helped, and members of the Military Wives Choirs (a subsidiary charity of SSAFA).  We then built a marketing and communications plan to promote the film using broadcast, print, digital and social media. 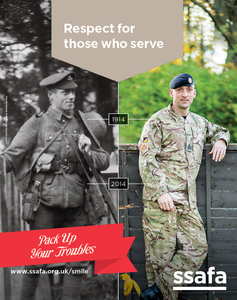 Our main objective was to raise awareness of SSAFA and our work and to reach as many people as possible. We kept a consistent ‘watch and share’ message that would successfully align support for our campaign with our audience’s overall support for the armed forces community.

The day of the launch

The campaign kicked off with a media launch on 10 August, 100 years after SSAFA launched the WW1 National Relief Fund for forces families.  The fund raised over £5million in the first year of the war, which SSAFA’s 50,000 volunteers distributed to families in need.

A photocall was held at London’s Tower Bridge with many of those featured in the video performing a rousing rendition of the song.  This was attended by the Press Association and other photo agencies, as well as our own commissioned photographer.

Launch day coverage included two BBC Breakfast interviews with full plays of the video, plus articles in The Sunday Telegraph, the Daily Mail Online and BBC News Online. Over the next few days the Press Association’s coverage was picked up by many national, regional and international outlets and our team secured further national coverage in the Sunday Mirror, Huffington Post and Sunday Express, as well as organising a series of local BBC radio interviews, regional articles and editor letters.  A total of 245 individual news and feature items ran, reaching approximately 33 million people.

The importance of digital

Building our campaign around an online video allowed us to place digital at the very heart of everything we did.

People could engage with our video on either their social networks or on our specially designed campaign hub. On social media, our organic content performed best in the first few days of the campaign with over 10,000 views on YouTube in the first 48 hours.

We then used promoted posts and tweets together with targeted ads across Facebook, YouTube and Twitter to keep up the momentum.  Along with the video, we posted case studies, archive images from WW1 and contemporary photography. These resonated especially well on Facebook where we got over 48,000 likes for our posts and almost 12,000 shares.

Twitter proved more effective for driving traffic to our campaign page. We worked hard to design a page with a video player that worked across all smart devices, which paid off – over 80% of visitors to the page watched the song and we were also impressed by how many people shared directly from the page.

We arranged a two-week partnership with Smooth Radio, with station and presenter endorsements encouraging people to watch and share the video and a campaign hub on the Smooth Radio website.  Alan Titchmarsh’s participation in the video also helped us extend the partnership to Classic FM with website editorial and mentions on his show.

This partnership was a new initiative for SSAFA so we were delighted our campaign has become one of ‘Smooth Celebrates’ top five most successful campaigns.

This brand awareness campaign far exceeded its objectives in terms of reach.  We also successfully achieved our aim to remind people that 100 years on from the start of WW1 our forces and their families still make difficult sacrifices, and the support SSAFA provides is as relevant and needed today as it was back then.

Described as the original viral hit of WW1, SSAFA was delighted to be part of the resurgence of Pack Up Your Troubles and would like to thank all those who helped make the campaign such a success. 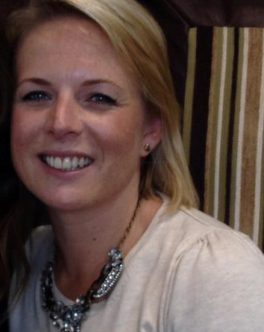 Nicola spent eight years as an officer in the Royal Air Force before joining the military charity sector last year, with a stint as an Intern Consultant at Bell Pottinger Business & Brand PR Agency in-between.  She's experienced in media relations and marketing communications with a proven ability to deal with issues and crisis in high pressure international environments and provide communications support and engagement advice to senior management.