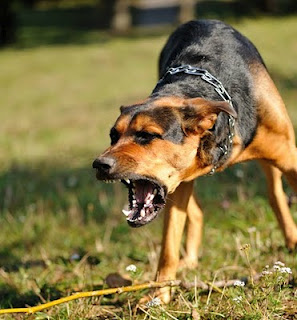 Guide dogs being attacked in the street by other dogs is a serious and growing problem. These attacks have a devastating effect on the person and guide dog concerned: aside from potentially horrific physical injuries is the psychological effect on both dog and owner.

Post-attack, some dogs become unable to continue their vital job of being a blind or partially sighted person's eyes, which means the owners not only lose their mobility aid, and therefore their independence, but also their companion with whom they have formed the strongest of bonds. And that's without mentioning the lost costs to Guide Dogs of breeding, training and looking after a guide dog.

Research undertaken by Guide Dogs on the number of attacks on guide dogs by other dogs showed that incidents had more than doubled in the space of 14 months, now standing at an average of seven attacks a month. But Guide Dogs found it was a struggle to get the authorities to take the issue seriously, and in particular to treat attacks on guide dogs as the same as attacks on a person.

Following the research, Guide Dogs’ policy and comms teams joined forces to create a campaign to raise awareness of the attacks and call for compulsory micro-chipping of all dogs so police can identify and prosecute owners of aggressor dogs.

“It wasn’t rocket science – it was planned and integrated activity, with both sides respecting each others’ expertise,” says Louise Robertshaw, head of marketing and communications at Guide Dogs. “Policy was able to advise comms on the best way forward to communicate the issues and our demands, and together we developed hard-hitting case studies with guide dog owners speaking about their experiences.”

A YouTube video of an actual attack, extensive Facebook and Twitter activity and a blog on the Guide Dogs website by the CEO gave impressive results. All comms activity drove to a campaign page on the charity’s website, which generated a letter to MPs. Two hundred and fourteen supporters wrote to their MPs, which led to the animal welfare minister Lord Henley agreeing to meet Guide Dogs to discuss the issue.

The British Veterinary Association renewed its call for compulsory microchipping, adding weight to the argument and bringing the topic into a new sphere of debate. The campaign also led to 205 media pieces on the subject, including national newspapers The Times and The Sun, and a piece on the ITV Daybreak show. Lively comment and debate on social media showed how engaged Guide Dogs' supporters were with the issue.

Guide Dogs is now undergoing an internal organisational restructure, which will pull comms, campaigning and policy together into a single directorate, with input from regional teams. Louise Robertshaw says: “The results of this campaign show how effective it is to have comms and policy working closely together. We hope the restructure will formalise and facilitate this co-operation for future activity.”