How storytelling got the attention of Parliamentary decision-makers

With the amount of emails landing in MP’s inboxes every day, it’s harder than ever to get your message heard.

If you do manage to grab their attention, how then do you get them to act?

Our Hear My Voice campaign was inspired by that change.

How did it all start?

The general election was a year away and the usual round of promises were starting. With 1.4 million people with a learning disability living in the UK, some at risk of hate crime, poor healthcare and social isolation, it was a crucial time to grab the attention of the candidates running for office.

Our campaign aim was to empower those with a learning disability and their families to vote, to be part of the democratic process, contact their local candidates and put their issues on the next Government’s agenda.

Working with the more onion agency, we built a microsite where people could share their stories online. They could then contact their local candidates and ask them to take the “I’m listening” pledge. These inspirational stories would help drive the campaign forward. 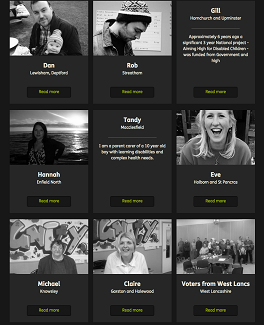 In their own words

We took a positive approach, engaging politicians with their constituents’ stories. Politicians began to realise how little they knew about what having a learning disability actually means in day-to-day life.

Engaging Networks provided the campaigning tool we used to target local candidates. We knew that if they received stories from their own constituents, it would make it personal and relevant, having more impact.

We kept our target numbers low as we knew some people might have found it daunting to write to their MP. If we could get 100 strong, unique stories then we could reuse them effectively to continue to influence MPs: a ‘quality over quantity’ approach.

It was important to forge long-standing relationships with candidates so we could influence decisions in Parliament. By asking them to publicly pledge their support for us they got a reward – a means of self-promotion and recognition for taking action. They were able to post their support messages onto our microsite and often went on to blog and publish press releases about their support too. We took care to be mindful of the Lobbying Act and therefore showed no party loyalty.

Conversations between candidate and constituent were sometimes continued after the campaign, forming a vital link. We now have a strong bank of stories from MPs sharing their knowledge and thoughts about learning disabilities, our Parliamentary team continues to work with them on the issues at hand. 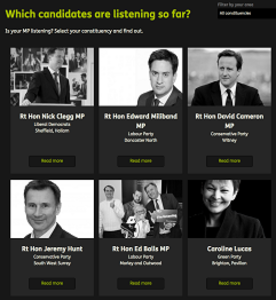 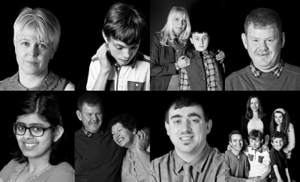 What was the result?

We’re proud to say that a fifth of decision makers in Parliament have now pledged to represent the views of people with a learning disability.

*This article was update after Mencap won their Third Sector Excellence Award. 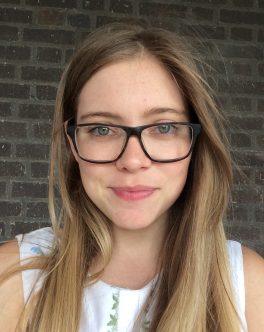