“I have some news… the video is now about a robot.”

I was in a meeting with the creative agency we’d just appointed to make our campaign video when the video director said this.

Looking back, I’ll be honest and say I did not expect those words to come out of his mouth. Two minutes later I was completely sold on the idea of a robot. Oh yes, indeed. Robots all the way for me. But I work at an international charity which deals with children affected by war. What am I doing making films about robots?

At War Child UK, we have three main challenges when it comes to our communications.

So when our advocacy team told us they were putting together a report on the subject of mental health and psychosocial support for children affected by war, and they would like us to do a communications campaign around it; my first reaction was not ‘oh yes, hello viral video’.

An agency that fit our values

Luckily, thinking outside the box is something War Child is pretty good at. Off-the-wall, leftfield ideas are always welcome. In fact, being bold is one of our organisational values. This helps when selecting an agency for our projects. We want someone who will mirror our values.

That’s also why Raw London were such a perfect fit for this campaign. The passion and energy the team brought to the project, and for working with War Child, was genuinely inspiring.

It was an easy decision to go with them. Pick the people you want to work with, not the creative. The creative can be changed. Which, in this instance, it was.

A journey for the viewer

We also liked Raw because the team understood the video was part of a wider campaign. We needed a strong engaging video which would capture people in the first three seconds.

But we also wanted to take viewers on a journey which would culminate in them going deeper into the issue of psychological support for children affected by war.

Our campaign video opens with a shot of a door opening to a mother and a robot. We hope this will immediately draw people in, making them think ‘why is there a robot?’

We see the robot struggling to adapt to a post-war normal life as she is haunted by her experiences. The final reveal shows that there was a child inside and the robot suit is merely the psychological armour she has constructed to protect herself.

From there, viewers are directed to a webpage, where we introduce some more detail, using stills from the video and photos from War Child programmes; drawing the line between the two.

Those who sign up to receive emails will enter a supporter journey of five emails which includes video stories of children in our programmes.

The journey concludes by inviting them to discover more by browsing our dynamic long-form webpage.

This page takes the 50-page Advocacy report, whose creation was the genesis of the campaign, and presents its findings in an interesting, mobile-responsive way. Our belief is our supporters will not be afraid to spend more time getting to know the issues we work on.

And it seems to be working. Although it’s very early in the campaign and we don’t have that large a data sample, the current average time on the page is around 15 minutes.

This, if nothing else, proves we have been successful in kickstarting a new conversation about mental health and psychosocial support for children in war.

Not bad for a little robot. 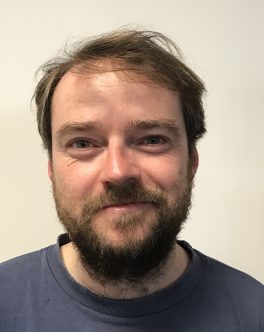 Dave’s been doing charity communications for 10 years. Starting at The Scout Association, followed by a spell at Free Tibet. He’s currently with War Child UK; overseeing digital since 2014.