Encourage your campaigners to meet their MPs in person, as well as emailing them, says Engaging Network's Jonathan Purchase

Many of you reading this will work for organisations that have published online actions targeting political databases.

So your supporters get to email, say, their MP asking them to act on behalf of your campaign. But how many requests have you seen to actually meet these political representatives to get the point across in person? This clearly isn’t an action for all supporters, but if you aren’t including it as part of your online campaigning strategy, you should be.

Face to face meetings are an exceptional way to promote your campaigns, but you have to have trust. You need to trust that your supporters will be saying the right things, so briefing them effectively is very important. At the same it’s vital that you don’t shackle them and force them all to use the same words.

Much like the editing of emails before they are sent, adding a personal touch will mean so much more. If your supporters have personal stories that link to your campaigns, encourage them to use these when they meet a political representative.

And just because this is all happening offline, doesn’t mean that it can’t be coordinated and monitored online. As well as recruiting supporters through web-forms with engaging content, there should also be a simple follow up mechanism for them to fill in so you can see what responses their politician(s) gave. This will allow you to build up an understanding of your supporters’ level of engagement, as well as the commitment of the political targets to the campaign. It’s easy using the web!

For example, part of CAFOD’s online campaigner strategy during the 2010 general election was to include a request to join their long term MP Correspondent scheme, which encourages campaigners to write to their MP three times a year on CAFOD issues and visit them in person at least once when more pressure is needed. As a result of a post election email, they had 101 people sign up to the scheme, which is an excellent result. This success makes sense though: fresh after taking one action, people are more likely to do something else too, whether it is fundraising, another campaign or a sign up request to join an offline line scheme like this.

Don’t fear failure. I would recommend having an option to "arrange a meeting" or a link to a scheme like CAFOD’s on the majority of your actions. Even if only a tiny minority takes you up on the offer, that’s already a step in the right direction. The more voices your campaign has, with a coherent but personal message, across multiple channels, the more likely it is to succeed. 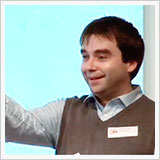