From a young age I have been captivated by radio. As a child I even geekily tried to create my own radio show with a tape recorder and microphone – little knowing it would one day come in useful for helping launch a charity radio station. But fast forward to now and I can proudly say I’ve been a part of the journey to launch the new online radio station Barnardo’s Radio.

Streamed on the Barnardo’s website and featuring pop music and pre-recorded messages from our children and young people, staff and volunteers. The project has enabled the charity to illustrate the rich diversity of Barnardo’s by capturing voices across a wide age range and sharing them widely across our audiences. From young carers, to care-experienced young adults, nursery-aged children and young people with learning difficulties, all have participated in the radio station.

Getting Barnardo’s radio off the ground

Launching an online radio station is an idea I always wanted to make happen for Barnardo’s. But it was only when I discovered the charity’s Innovation Fund, which is supported by it’s partnership with People’s Postcode Lottery, that I was able to secure funding after the proposal successfully topped a staff ballot in October 2019.

At the heart of the idea was giving our service users a voice and a platform to be heard which is a central tenant of our overall organisational Voice and Influence strategy to continually find new and innovative ways to amplify and embed the voices of our children and young people in every aspect of our work.

Initial recording sessions to capture messages from children and young people involved our London services and were a lot of fun – especially those that were done with a group of four-year-olds in Hackney. Once they had mastered the difficulty of saying the word “Barnardo’s” – which is a pretty difficult and strange word for a young child to say – there really was no stopping them. In their messages the four-year-olds talked about all the fun activities they were able to do through Barnardo’s such as playing and making friends and how the charity helped others in need.

Our older children and young adults were able to base their messages on more complex personal experiences such as growing up in care or the difficulties of caring for a sibling with a disability whilst explaining how Barnardo’s has made a positive difference to their lives. Plus as Barnardo’s Radio is very much influenced by our children and young people as well as getting them to prerecord messages to share we also got them to tell me the type of artists and songs they want on the playlist and as a result the station has developed an upbeat and positive sound which reflects their outlook.

Setting up and running an internet radio station has changed considerably over the years. Previously a lot of different hardware and software would have been required, but these days it’s possible to run an entire radio station through cloud-based technology using just a laptop and an audio recorder.

For Barnardo’s Radio we use Radio.co, an internet radio provider that makes it very easy to set up a stream through an online portal. For a very modest price, a subscription with them can include a streaming allowance of 10,000 listeners and plenty of capacity to upload thousands of songs and audio clips to a fully-integrated media library and playout system.

In addition to this if you are looking to play music on your station, like we do, then you need a PRS licence from the Performing Rights Society. But don’t worry for non-commercial small-scale stations, this generally covers you for the vast majority of recorded songs.

Ultimately the hardest thing about launching an internet radio station is not the technical aspects, which most people with basic audio editing skills can master, but actually having enough content. This is particularly true when unexpected events like coronavirus happen and throw a spanner in the works of content gathering. Luckily for Barnardo’s Radio, I was able to record 60 messages with our children and young people, staff and volunteers before the Coronavirus restrictions came into force which is enough to keep the station sounding fresh over the next few months. But there is definitely a lesson to be learnt here about gathering the best content you can when you can and being able to repurpose material so you can maximise its use.

Barnardo’s Radio is based on the Jack FM format which is more like an MP3 player set to shuffle mode than a conventional station with designated programmes – a format that a large proportion of mainstream digital stations have popularised in recent years. This means that on Barnardo’s Radio there are no DJs with live shows; instead the playlist is interspersed with pre-recorded messages and links which take account of the day and key things happening for the charity that week. The impression of an authentic radio experience is then created even further by uploading three to five new links, messages or songs each day to ensure the station sounds current and not repetitive.

What having a radio station means for the charity’s comms

Barnardo’s Radio has been truly embraced as a new media platform for the charity. Within the first two weeks of the station launching on 1st April just over 2,400  listeners had tuned in which is considerably more than initially expected. The comments from staff have also been truly heart-warming with colleagues saying the station has helped them feel “connected” during these socially isolated times. I have had messages from staff tuning in at home with their children dancing to the music in the kitchen and also from colleagues working in our frontline services who have been listening with the children and young people we support. We have even launched an 80s music show for staff who have memories of Barnardo’s during this era.

For us, Peak-time listening occurs between 2-4 pm which is when the station’s daily ‘shoutouts’ are aired for colleagues who have sent in messages. Listeners are savvy enough to know I am not live in a studio and able to instantly read out their messages, but I always let them know in advance when their shoutout will air. By promoting this as a key weekday feature, this has helped to build and sustain the station’s audience.

The most favourite shoutout I had over the past few weeks was from a colleague in Belfast who requested one for her 12-year-old son who had raised almost £500 by shaving his head in order to raise money for children in our Northern Ireland region. It was such a lovely message to read out and it was great to hear afterwards from his mum that he was delighted by it. Moments like these encapsulate why I am so glad Barnardo’s now has its own radio station. 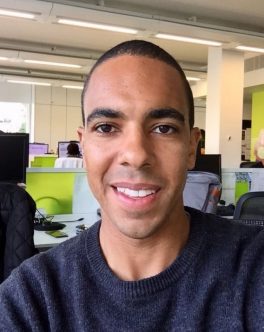 Scott Roberts is a Media and Communications Manager at Barnardo’s for the charity’s London region. Before joining the charity sector in 2014 he previously worked in local radio as a journalist.