Making a local campaign national (with a little celebrity help)

In August 2016, a mental health project at YMCA DownsLink Group, based in Brighton, approached YMCA England with a PR campaign proposal. Working closely with its local NHS Clinical Commissioning Group (CCG) and an agency called Spirit Media, it had devised a fantastic campaign to tackle mental health stigma in its local area – #IAMWHOLE.

The reasons for focusing on this topic in Brighton were stark: the city had one of the highest rates of hospital admission in the country for self-harm among under-18s while a recent local CCG report had also highlighted the need for a city-wide campaign to challenge mental health stigma.

Working together locally, the team at YMCA DownsLink Group, the CCG and Spirit had already made amazing progress building the #IAMWHOLE campaign. Local boy and amiable celebrity, singer Jordan Stephens from Rizzle Kicks, was already on board and had agreed to use his new song ‘Whole’ as the soundtrack to the campaign. A music video had also been created and a campaign video was on the way. But the more the team discussed the theme, the more it was obvious that it could very easily go beyond Brighton and become a truly national project. It just needed a newshook and that is where YMCA England was able to help. Our major PR wins over the past few years had been around our research work, with our most recent project looking into the harms of legal highs achieving almost 30 national media mentions. Our key had been an ability to mix quantitative data with qualitative feedback from young people in YMCAs that allowed us to report hard news through young people’s voices.

So in late August, we commissioned national research into mental health stigma and began to host interviews and focus groups with young people in YMCAs across England and Wales. Within a couple of weeks, our national findings had discovered that more than a third of 11 to 24 year olds with mental health difficulties had experienced stigma and more than half of these had claimed it had originated from their own friends. This became our national news hook. 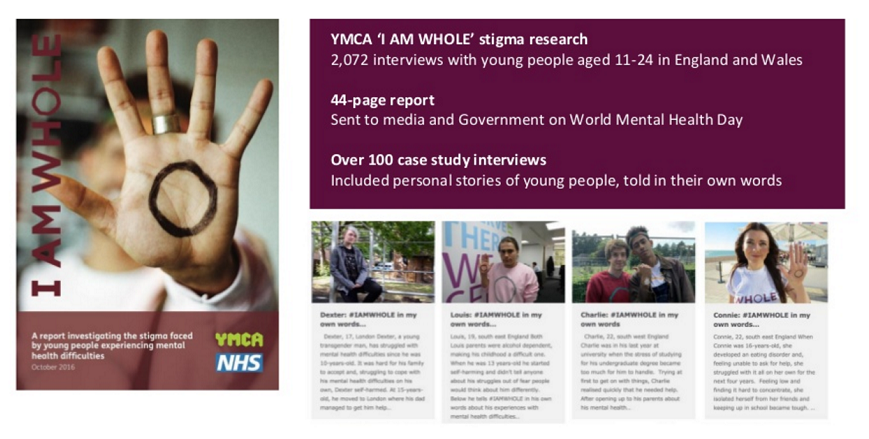 Over the weeks leading up to our chosen launch date, World Mental Health Day (10 October), we worked hard to engage journalists and broadcasters, ably assisted by both Brighton and Hove CCG and Spirit. Each campaign partner took ownership of its own area of expertise. While we focused on our research, Spirit pushed out our broadcast package that, by now, also had the likes of Ed Sheeran and James Corden involved. In line with our campaign aims to combat stigma, we also made efforts to engage the rest of our YMCA federation, asking young people to support us with #IAMWHOLE selfies and share their mental health experiences on social media. Throw in a local pre-launch event in Brighton and we were confident we had everything covered.

#IAMWHOLE was a national success and more than we could ever have envisioned when YMCA England first got involved just 10 weeks before launch date. We reached more than 35 million people on Twitter and 110 million people in traditional media. On launch day, #IAMWHOLE could be seen on Mail Online, The Sun, Channel 5 News, Good Morning Britain and the London Evening Standard to name just a few outlets. We also had more than one million views of our campaign video on Facebook and YouTube.

But, for everyone involved in #IAMWHOLE, the campaign was about much more than media reach. We also launched a mental health services directory (www.findgetgive.com) to help young people all over England find local services near them and provided a platform for people to talk about mental health stigma through the #IAMWHOLE social media selfie promotion. The only question that remains is, what does phase two hold for us? Time will tell…

Andy is the communications manager of YMCA England, the national council of YMCAs in England and Wales. A former regional journalist and feature writer, Andy also has experience of new media and internal communications across the charity sector.