What do the Met Office, The Fresh Prince of Bel Air and the campaign to legalise assisted dying have in common?

They can all be found in Twitter's latest innovation, Twitter moments, which is now available to all users.

Twitter says moments are “the best of Twitter in an instant”. Essentially it’s a new type of content that allows you to pull together several tweets into an engaging and immersive experience. If you click on the lightning tab in the app you can see some of what’s on offer.

Twitter moments are a great new way to tell a story, so there are lots of ways charities can use them. I think the most important feature is that it allows you to curate your supporters' tweets to form the story – so it’s social proof and digital storytelling all in one; a bit like Storify. 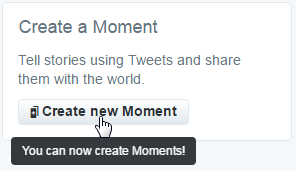 To create your first moment, simply find the moments tab on the desktop and click “create new moment”. From there it’s fairly self explanatory but if you would like step-by step guidance, Twitter has you covered.

Unlike anything else Twitter has done recently, the functionality to create a moment launched first on the desktop. Some sort of mobile version is expected down the track. But don't be fooled, although you create them on the desktop the actual output, the moment, looks very much designed to be consumed and shared on mobile.

As Anna Rose Slingo from the Met Office points out in her excellent top tips for moments, moments are about stories.

For Dignity in Dying's first Twitter moment, rather than capture something new, I looked back to a significant event I was certain I could find some great tweets about – the Assisted Dying Bill. I chose that because I know it’s really important to our supporters but that not everyone, especially new supporters, where aware of exactly what happened and how important it was. I wanted to:

It was really easy and here is the result:

⚡️ "The Assisted Dying Bill" – our first use of @TwitterMoments tells an important story. Please sharehttps://t.co/AYAEvaCLYj

The tweet featuring the moment got an above average engagement rate, 1.9% vs an average that month of 1.3%. Thirteen people tweeted about it themselves which I think, off the back of a single tweet, shows the potential of moments – they seamlessly prompt users to share the moment and engage with your content.

I'm no expert, but having just created one, a few things did jump out at me:

Or even better, a video. This is the first thing people will see; you have just seconds to earn some further attention from your reader. So make it inspiring, funny or even shocking.

You need to grab people's attention and set up what's coming next – like the opening scene to a Lethal Weapon movie!

Although you are on the desktop, most people will probably read your moment on mobile. So make sure you preview the images in mobile view, crop ones that don't fit and remove any tweets with images that just cannot be cropped into the shape of a mobile screen. You want people to swipe through to the end, so each screen needs to work and stand alone.

Before you tweet your moment, take a look at it on your phone as a final check (I DMd mine to myself).

Remember each tweet you include is, well, a tweet. It can be viewed in the normal way and interacted with. So if you are re-surfacing old tweets like I did, you need to be prepared to reply to some questions about old tweets. Also, if you are using other people's tweets, that could impact on them. I wonder if Sarah Champion MP noticed when people suddenly started retweeting her tweet from over a year ago?

Moments have a lot of potential. Here are some things I'd expect to see soon:

That's it! Over to you, please post any moments you’ve seen and think are interesting in the comments.

director of fundraising and marketing, Dignity in Dying & Compassion in Dying

David is Director of Fundraising and Marketing at the campaign for Dignity in Dying – a national membership organisation working to change the law on assisted dying. He also performs the same role at their sister charity, Compassion in Dying, which works to inform and empower people to exercise their rights and choices around end-of-life care. Before that he worked at the Muscular Dystrophy Campaign in a number or fundraising roles, with a focus on individual giving and digital.