In parts 1 and 2 of this series we explored why you need a social engagement strategy, and how to look at your historical data to understand what your audience is responding to. This part will delve a bit deeper into thinking about content development for your social channels as well as what should be included in your strategy.

It’s easy to fall into the habit of creating social posts that all feel quite samey. It’s safe, you know what you’re doing – and you’re keeping on top of everyone’s requests (or perhaps demands!) on how the channels should be used. But a broader range of content will be more engaging for your audience. Plus, posts that look different from one another will stand out in their feed, especially if people have grown used to your posts all looking very similar to each other.

If the idea of coming up with more varied content sounds daunting – don’t despair. This isn’t about creating lots of brand new images and graphics for use on social. Your strategy will only succeed if it’s simple enough to keep up. You want your social channels to work in harmony with other online content, and a good chunk of your social posts can be based on sharing key website pages, links to YouTube videos, sharing blog posts – or even news stories you might have been featured in. What’s key is how you frame snippets from those stories, so that the post is interesting enough in its own right, as well as likely to draw people to want to follow the link and see more.

This post from Plan International UK stood out to me because it told a story that we don’t hear so often from international development charities. It brings to life what phrases like “poverty alleviation” mean in practice. 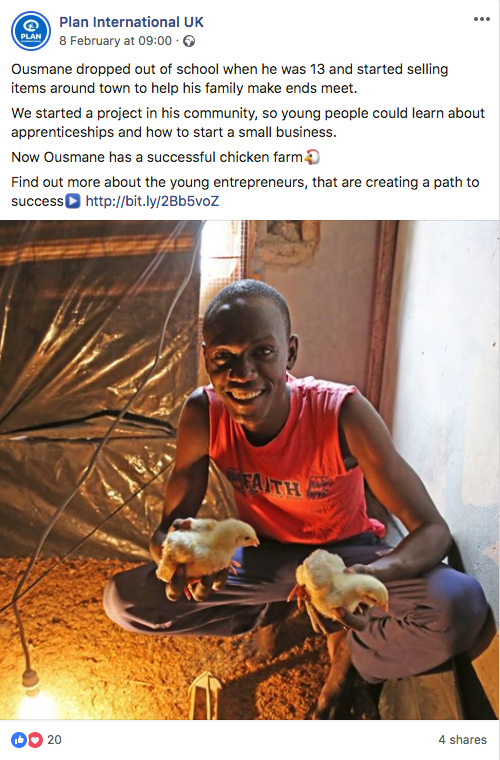 To start you off, pick a few other charities working in your field and have a look through their social feeds. I’m not for a second suggesting mirroring another charity or ripping off their content, but you will hopefully start to see a range of voices, doing things in different ways, which might well give you some ideas of how to develop your own content.

Here’s what to look for:

Through this, you should begin to get insight you can learn from – both things you might wish to emulate, and things you want to avoid.

Once you have all of this research done, you are ready to start building it into a useful document. I would advocate tackling each of your channels separately (although they can, of course, be within the same strategy document); while there may be overlap, the audiences between channels will vary and what works well on one channel won’t necessarily land on another. And while you can share the same content via different channels, I would always advocate tailoring. Buffer have published some broad guidance on this for some of the biggest social platforms, along with examples of their own approach.

What should be included in our strategy?

This can sit alongside any existing work you have done on audience mapping or personas – you don’t have to start again from scratch! If you already have specific audiences in mind that you are providing content for, then bring all of that insight in. You may well find through this process that you want to make some changes to how you approach content for your known audiences, based on your new analysis, but building on what you already have can be a really useful starting point.

You have a better understanding of what will work in your organisation than I do, so whilst I will outline the key areas I think should be included, it’s up to you to turn it into something your colleagues will get on board with. But generally you should include:

The nuts and bolts stuff

In short, all of the sorts of things that are essential for the basic running of your accounts. A crucial thing that I think is often missed is the actual being social element. You should be taking the time to really engage with the supporters who are giving you their time by commenting on your posts, sharing stories about what they are doing to support you, or jumping to your defence when an angry commenter complains about how much your CEO is paid. Your organisational tone of voice might be quite distant and formal, but that doesn’t translate as well on social channels so you might need to flex a little to get the best from them. How you put yourself across on social is crucial if you are looking to grow an engaged community of supporters, so don’t overlook this side of things.

Here’s the meaty bit where you will bring all of your research and hopefully some new ideas together. Include screengrabs of either your own or other charities’ posts (or mockups) where you can highlight what is particularly good (or less good) about them and how to incorporate that into what you do. As a rule most of the charities I work with on this tend to be posting too little about impact, and talking about need in ways that don’t prompt engagement. They also tend to feature the organisation’s voice very heavily, with beneficiaries, their families, and front-line staff left out of the picture somewhat. I’d argue that most social engagement strategies would benefit from including much more focus on these elements. We should stop telling the stories and allow others to do . Plan International UK launched a TV ad this year that was filmed by children they had helped – and made a lovely behind the scenes video too. 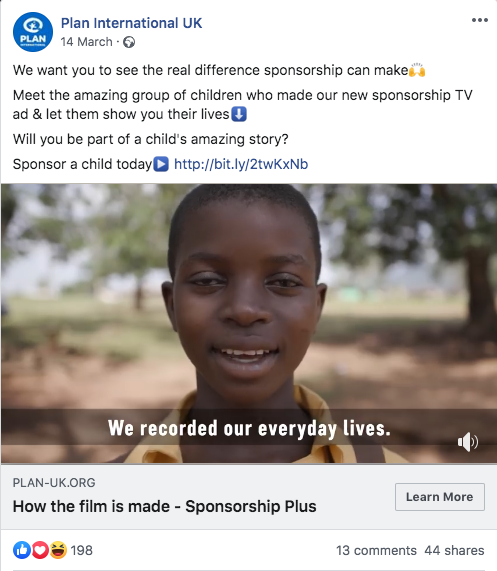 Your research should allow you to develop a list of topics that you want to make sure you include regularly as well as ideas on how to present them. Include all of this.

A note on content generation: I once ran a session with participants from fundraising, digital and comms where we took off our “we do it like this” hats and suggested new ideas. Some were things we had seen others do, some were totally off-the-wall new ideas of how to present things, some involved dogs because, well, the internet. We all brought along examples of things we had seen and found interesting, and we discussed whether there were aspects we could take from them. We came up with a number of new things to take away and try out. It was useful because some of the attendees didn’t work directly on the channels which meant they were less invested in the current ways of working and we got a broader ideas base as a result. It was a great opportunity to come together and grow understanding of the channels with the less directly involved members too.

A document like this only truly becomes a strategy (rather than, say, a plan or a guide) when you include metrics and goals – and the final post in this series will look at this, as well as how to keep your strategy current and useful.

Check out the final post in the series for advice on tracking success. 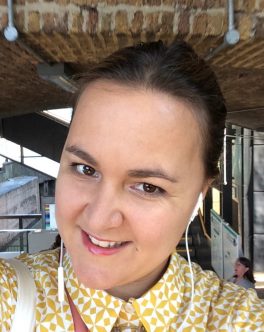 Lisa is a freelance fundraiser who has been working in charity since 2004. Now primarily focused on digital fundraising, she previously held strategic roles at Breakthrough Breast Cancer and Anthony Nolan, and worked with many household names as a supplier including CRUK, Save the Children and UNICEF.