Prompting Behaviour Change: getting to grips with audience

In this new series we take a look at Time to Change’s approach to Behaviour Change campaigning and share the insight we have gained for others hoping to do the same – this week Claire,  joint head of social marketing, talks about understanding your target audience.

Designed to help readers feel more informed when feeding their own insights and evaluation learnings into their campaign strategies, future articles in this series will:

One in four of us experiences a mental health problem in any year. But despite the progress that has been made, talking about it is not everyday and ordinary.

Time to Change is a growing movement of people who want to change how everyone thinks and acts about mental health. We use behaviour change strategy, deep audience insight and creative marketing to fight stigma. This is not an easy task. Attitudes in many groups we work with are entrenched. But as an organisation we know from talking to people with lived experience that stigma and discrimination are the biggest issues we face – damaging recovery, well-being and affecting every area of life.

How we use research to understand our target audience

Talking with people is at the heart of what we do. When we began in 2007, we talked to many people through extensive qualitative research, and used quantitative research and national attitudes data to help us identify the audience we should target. It needed to be an audience we could engage and empower which would, in turn, affect social norms and start a national change.

We called the target group that emerged from our research – Subconscious Stigmatisers. Key characteristics of this group of BC1C2 (more middle class), 25-44 year olds were that they would say things like (mental health) ‘is frightening but I don’t know what to do to help’ and ‘it’s sad but it’s not me’. They also often knew someone with a mental health problem. That was a key insight as, our research found that once the issue is out in the open and the connection is made to their lives, people have an incentive to change and can – as we hoped – influence those around them. This group was the core target audience for our marketing until 2016 when we carried out a strategic review to establish who we should target next to have the biggest impact.

Our strategic review found that whilst, our anti-mental health stigma and discrimination work had made great strides in getting our initial target audience of Subconscious Stigmatisers to talk about mental health, a lot of men still had negative attitudes and behaviours. Primarily 24-44 C1C2D (more working class) men were identified as the audience we should target next.

We knew this would be a challenge as research showed that these men were often cold to the issue of mental health. They simply didn’t feel that mental health problems were likely to affect them or the people they knew.  Believing they had little connection to mental health – they seemed hard-wired not to talk. Compared to women, they knew less and had more negative attitudes towards mental health which was compounded by high levels of fear.  Whilst they were less likely to seek help, they were three times more likely to take their own lives.

We conducted qualitative groups. Men showed us that friendship means everything.

They would go out of their way to help their mates but weren’t comfortable talking about mental health. When we told them the powerful statistic: one in four people experience a mental health problem each year, they looked around the room. There were eight blokes. The penny dropped. If it didn’t affect them, then it probably affected someone in the room and possibly one of their mates. We told them their actions could make a difference and even be lifesaving. This gave them a role they could personally fulfil.  They were more than capable of ‘feeling’ and up for the challenge of helping. They just needed to know what to look for and what to do!

This insight led us to the campaign platform: ‘Be in your mate’s corner’ which we launched in 2017. With a primary audience of C1C2D men, we use the ‘Trojan horse of brotherhood’ in our ads to grab people’s attention and hero mates into being there for each other. The campaign shows how a mate with mental health problems might behave and gives clear tips on how to step in and help – building on the positive ways they usually behave as a mate rather than dwelling on their negative behaviours. We celebrate how the everyday and ordinary things people do for their friends – checking in, being there and shouting at the telly together are important when someone’s fighting a mental health problem too. 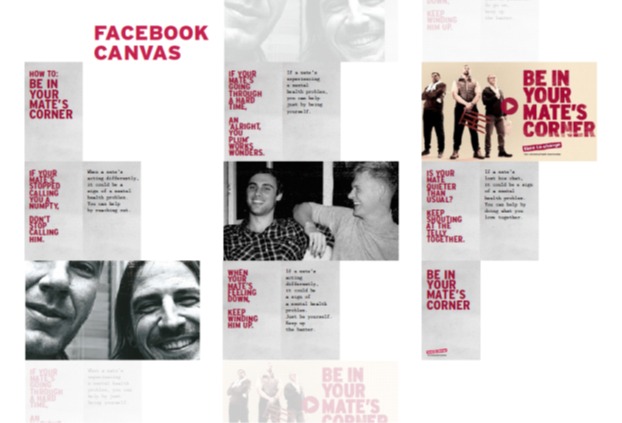 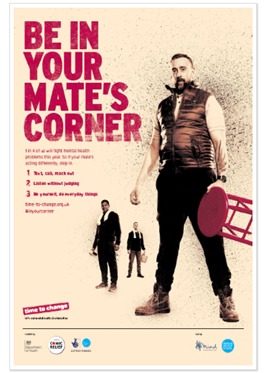 To help us understand our audience more at the end of our second campaign burst, we carried out segmentation work with Consumer Insight which showed us how our audience moves from being ‘detached’ to ‘engaged’ men:

So, research is key to understanding our audience and showing us how we should develop our campaign to meet their needs. It has been and continues to be vital – showing us how to cut through to our core target men who previously seemed hard wired not to talk.

The  Ask Twice campaign runs throughout October, find out more about getting involved here. 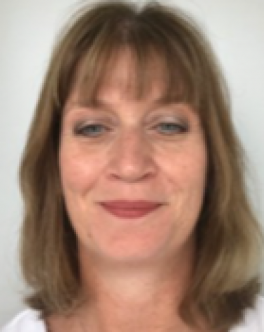 head of marketing , Time to Change

Claire has been working at Time to Change for four years where she is head of marketing – working as a job share with Katherine Crawshaw. During this time she has overseen the development of the In Your Corner campaign targeting men. Before then she worked on a range of government campaigns including anti-smoking, FRANK, sexual health and Be Clear on Cancer.