Securing political attention for your campaign

Trying to get a seat at the political table is as difficult as ever, even if you’ve been in the charity world for a long time.

Take for example Orchid, a male cancer charity established in 1996 by cancer patient Colin Osborne and the oncologist who saved his life. Their aim was to build an organisation that would help deliver better outcomes to generations of men and their families facing a male cancer diagnosis. As part of this approach, they wanted to position the charity as a core player in policy development affecting male cancer, strengthen relationships with stakeholders holding an interest in male cancer, and to help drive education and awareness to patients and the public.

Yet despite having a substantive history and ambition, it is only recently that the charity has been able to enact the political influence they wanted.

With the help of my communications agency, Spink, Orchid developed a strategy to ensure the ambitious result of gaining political clout was achievable. Therefore, the decision was made to focus specifically on prostate cancer, a growing problem, which needed urgent attention. In addition, we decided to:

Together, Spink and Orchid recruited a team of experts to help produce a report that highlighted the potential prostate cancer crisis that the UK faces, unless the Government and healthcare professionals address the issue.

The report highlighted that one man every hour dies from prostate cancer despite it being one of the more treatable types of cancer if diagnosed early. Lack of awareness was a key issue, and therefore Spink commissioned a national survey which found that 1 in 3 men ‘know nothing about prostate cancer’, confirming this view.

This was a significant turning point which reinforced the need for a public educational initiative.

Spink then worked with experts to identify the key areas for consideration that the public needed to be aware of, including the main prostate cancer symptoms. This lead to the creation of the acronym:

Changes in your pee

The “Face up to Prostate Cancer” campaign was formed. Using the acronym, Spink created a physical infographic which was distributed across multiple channels including Twitter, media outlets, politicians identified to have an active interest in health, in person to MPs, the Orchid network and the report itself.

There was an overwhelming response to the ‘Prostate Cancer Report’, as it generated over 120 pieces of media coverage that included national papers as well as broadcasters such as ITV and Sky News, achieving great awareness for the charity.

On social media, 34 MPs also supported the campaign by sharing the infographic, including the shadow minister for public health, Sharon Hodgson and the leader of the Lib Dems, Sir Vince Cable. NHS England and NHS Choices, also shared their support. That week #FaceUpToProstateCancer became the No. 1 trending twitter topic by Parliamentarians.

During Orchid’s attendance at the annual parliamentary “Britain Against Cancer” conference, the charity presented its report to influential MP’s such as the then Public Health Minister, Steve Brine and the Cancer APPG Chair, John Barron.

Finally, two days after the launch of the report and the resulting media coverage, we were delighted that Theresa May coincidently announced £75 million of funding for research into early diagnosis and treatment of prostate cancer.

This campaign highlighted that in addition to their role in policy development, political figures have a huge influence with the public and are receptive to disseminating information within their constituencies.

Developing a hard-hitting, credible report provided the insights and motivation that MPs needed to support the campaign, whilst the F.A.C.E. acronym and supporting materials made it easy for them to disseminate information via multiple channels to a wide and engaged audience.

In an era when public trust in politicians is at an all-time low, working collaboratively in partnership with MPs to improve health outcomes can only be mutually beneficial and is something Orchid will continue to build and develop their political engagement with. 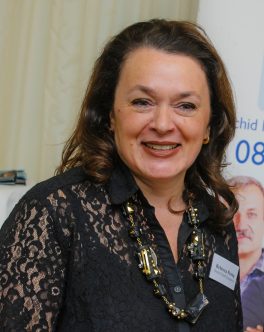 Rebecca has led significant organisational growth since joining the charity in 2008. Under her leadership Orchid has campaigned for better cancer care and developed a range of services for people affected by or interested in male cancer.