How do you kick off your biggest ever fundraising appeal? To launch A Million Miracles we wanted to create an exciting and ambitious event to grab people’s attention.

The idea was to create a storytelling experience that would unfold over multiple channels, a project with not only stunning imagery but also a movement of people ready to share it.

We decided to do something really innovative and broadcast a cataract surgery live from a hospital in Malawi. Then the following day broadcast the moment the patient’s bandage was removed and he could (fingers crossed) see once again. The moment a person regains their sight is unforgettable and we couldn’t wait to share it with the world.

The stars of the event were: Winesi March, a grandfather who had been blind for two years with cataracts; his family he depended on for everything; the charismatic health worker Madalitso Nyangulu, who found Winesi in his remote village and diagnosed him, and the surgeon Dr Gerald Msukwa, who performed the life-changing operation. These were the people whose story we would tell.

The #SeetheMiracle storytelling event was conceived and implemented by creative agency, Fieldcraft Studios. An incredible amount of photography, film and broadcast kit was needed to collect photos and videos ahead of the broadcasts, but also to stream the videos live across the internet (via a Google+ Hangout). David Carter, Fieldcraft Studios director and chief maker, cleverly custom-built a TV studio to fit into a suitcase, as well as custom-building a camera rig and distribution rig and other cool techy things.

We used a lot of cameras, miles of cables and tonnes of connectors and adaptors. It took hours to set up and test everything to make sure it was all working properly. Considerable time went into testing all the equipment – including scaling the hospital roof to test the satellite needed to transmit the broadcasts.

The first day’s broadcast, on Wednesday 8 October, came live from the operating theatre, where Youtube vlogger Doug Armstrong presented the cataract surgery, introducing the audience to each of the characters, and talking them through the seven minute surgery. The 20 minute broadcast included questions from participants on the Google+ Hangout and people taking part on social media. It all went really smoothly and we gave each other congratulatory pats on the back at the end of the broadcast.

Day two saw us packed into a small, hot hospital ward where Winesi waited patiently to have his bandage removed. Moving all the kit from the operating theatre and re-setting up in the ward took all morning. Come 13:30, an hour before the broadcast, everything had been tested and all looked good…until 30 minutes before we were due to go on air, when a power cut tripped all the electrical equipment.

The team worked hard to get it all set up again, but frustratingly after only a couple of minutes live on air we lost our connection to the Google+ Hangout and despite trying hard to reconnect, couldn’t get it back up and running again. Unfortunately, power cuts are just one of the challenges the hospital faces all the time. We took the decision not to keep Winesi waiting any longer, and to go ahead and film his bandage being removed to share with the audience later in the evening. It was incredibly frustrating, but Winesi’s well-being was the most important thing. He’d waited long enough!

Cataract surgeries don’t work 100% of the time, so there was anxiety and apprehension as we waited for Winesi to have his bandage removed. The moment of truth arrived as the doctor peeled away the bandage, and a collective sigh of relief was almost audible as Winesi’s face lit up at the realisation he could see once again. There was barely a dry eye in the house as the family burst into song and everyone danced in celebration.

The video of the moment Winesi gets his sight back has been really popular, with a number of media including Telegraph, Independent, Daily Mail, Metro, Reader’s Digest and many more featuring it on their websites. The BBC World Service and numerous regional radio stations ran interviews with Doug, Dr Gerald and Winesi, and we had many celebrity quotes and tweets throughout.

A team of around 40 bloggers engaged with the project, and 1,500 primary school children took part in a 100WordChallenge entitled “And suddenly I could see again”.

In the week of the broadcasts alone the appeal raised around £15,000 and donations are still pouring in.

The whole project has been an example of what can be achieved with great team work cross-organisationally at Sightsavers, and also working well with a creative agency and their networks. Find out more about the appeal, by visiting www.millionmiracles.org or see how the launch unfolded on the hashtag #SeeTheMiracle. 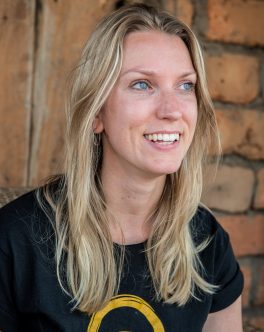 Julie works within the media team, engaging high profile and celebrity supporters, as well as working closely with the fundraising team to raise the profile of Sightsavers and its fundraising appeals in the media.

As part of Sightsavers’ A Million Miracles appeal, Julie brought new celebrity supporters on board and told our existing ambassadors all about it. She also be travelled to Malawi as part of the See the Miracle broadcast team in October.