The Miscarriage Association offers support and information to anyone affected by the loss of a baby in pregnancy, raises awareness of pregnancy loss and helps promote good practice in medical care.

Earlier this year, the charity commissioned JumpingWater Communications to develop a campaign designed to reach as many people as possible with an informative message about what to say to someone who has experienced a miscarriage. The campaign has struck a chord with thousands of people, by just using three essential ingredients (and a big budget wasn’t one of them): facts, risk-taking and personal stories. Here’s what we did.

Last year, the charity commissioned a survey on public perceptions and attitudes towards pregnancy loss. It revealed that while most respondents believed talking to someone who’s had a miscarriage could be helpful, almost a third (32%) said they would not feel comfortable doing so, even for a close friend. When asked why, most said they would not know what to say.

People who use the Miscarriage Association’s support services regularly share with the charity the comments they’ve received after a miscarriage or ectopic pregnancy. Comments such as, “just think of it as a bunch of cells” or “never mind, at least you have a child”. These comments are intended to help, but in fact, often hurt.

The Miscarriage Association wanted a campaign that would help people know what to say. The SimplySay campaign was crafted around a simple message:

Lost for words when someone close has a miscarriage? Simply say ‘I’m sorry’. 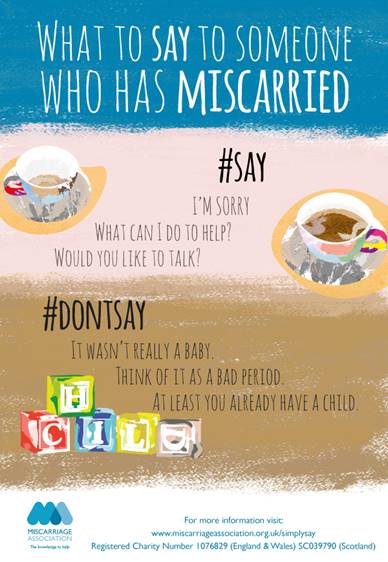 The charity approached Ravensbourne College to run a competition with second-year students to create an animation for the campaign as a live brief. The students were provided with a brief and a script. Running a competition like this had some risks. What if there was no take-up by students, or the work produced was not suitable for the campaign? It also meant giving up control as we were not commissioning an agency.

However, the approach paid off and was hugely successful. It resulted in the charity having two brilliant animations to use (one saved for Baby Loss Awareness Month) and was significantly cheaper than working with an agency. The winning animation formed the digital launch of the campaign and has so far generated almost 80,000 views on social media, with a reach of 200,000.

The students were further involved, through the production of an infographic detailing what to say to someone who has miscarried. This was then edited into sharable square versions and linked to the resources page. After the animation, the infographic was the second most shared part of the campaign, with a reach of 51,850. The charity has even received a request from Uruguay to translate the infographic into Spanish. The campaign also led to requests from health professionals for posters of the SimplySay graphics, as well as links to the campaign via their own websites and social media platforms.

People’s own personal experience of miscarriage was at the heart of the campaign. The charity encouraged those who have been through a miscarriage, molar or ectopic pregnancy to share photos of themselves holding signs that reveal the most and least helpful things said to them. To indicate helpful words, they wrote #say on their signs, and for the things they’d prefer not to hear, they wrote #dontsay.

Hundreds of people took to Facebook to post an image of helpful and unhelpful things they heard, and the initial post received over 2,000 likes and 1,000 shares.

Following the launch of the campaign, some approached the charity to say that, by sharing their photos on Facebook, they had connected with other Facebook friends who divulged they too had been through a miscarriage, creating new bonds and support. Those who have participated – men as well as women – said they were grateful for the opportunity to get their (often unspoken) feelings on this topic out there. They all want the opportunity to say, “this is what I need, this helps,” as well as “this really hurts, so please don’t say it.”

By creating a strong story with a simple message, the campaign generated extensive national and regional media coverage, including features on BBC Radio 4’s Woman’s Hour, BBC 5Live, BBC Scotland, The Huffington Post and Stylist magazine. It also generated thousands of social media interactions, with the launch post on Facebook achieving a reach of almost 200,000 and an increase of almost 10,000 website sessions compared to the previous month.

During the month of the campaign, the charity saw dramatic increases in new followers on its Facebook and Instagram pages, with a six-times increase in the number of new followers on Facebook compared to the previous month, and almost four times more new followers on Instagram. To take advantage of the growing momentum generated by the campaign, social media posts were planned every day, so they provided live content such as media interviews and news stories as they happened.

Total Twitter impressions for the Miscarriage Association during the campaign were 151,3000, compared to 42,500 impressions the previous month. The charity almost tripled (286 vs 101) the number of mentions it generated.

The impact of the campaign has been particularly exciting for the Miscarriage Association because it’s a small charity with only six members of staff. The campaign was initially designed to run for just one week, but due to the interactions it sparked across social media it ran for much longer. The charity enabled this by continually creating new material like the background interviews with the students who created the animation. The Miscarriage Association has shown that you don’t need a big budget to reach millions of people. You just need a compelling story and a simple message.

Building a human connection in a digital world 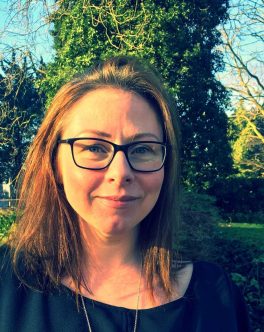 From homelessness to health, Mel has spent the last 17 years working in the charity sector focusing on raising awareness, brand building, publications and campaigns. Mel was head of communications at Keech Hospice Care for nearly five years before leaving to set up her own communications agency. JumpingWater
Communications specialises in bringing stories to life and finding innovative ways to communicate and attract attention. Prior to Keech, Mel worked for the MND Association where she managed the charity’s press office and award-winning national awareness campaigns.