To be as good as you can you need to constantly review and learn and change. Society never stands still. And neither should charities. There needs to be a cultural shift in the way charities think so they begin to understand and embrace innovation.

Here Karmarama/Accenture Interactive’s strategy lead, Sarah Jane Blackman, shares her advice for people discusses social innovation and the need for the sector to keep progressing if it’s going to capitalise on the new philanthropy.

Philanthropy ‘remixed’ for the next generation

“It’s Monday. On my walk to work, my Google community alert beeps to tell me that Cathy, a young lady with visual impairment, needs assistance at a hectic crossing opposite my station. I can just see her now at the end of the road, I tell Google I’m on my way. Settled on the train I check my email, opening a jubilant video from a family in Glasgow, reporting back on Theo’s back surgery last night, a life changing procedure that I have co-funded with some friends at work. I walk the last 25 minutes to work from Victoria, and try to not lose pace, to make sure my fitness app automatically donates money to my favourite music charity — Raw Material. I feel good☺ Nice to feel I have an impact on the world, in my own small way…”

Innovation is more than technology

This is not my own personal fantasy but the kind of social innovation that is happening right now, all over the world, shaping a new set of behaviours that is becoming normalised by a whole generation of young people. And while it’s tempting to pin this innovation on the back of rapid technology adoption, it’s important to acknowledge the social and human dimension behind this change. Because only by understanding the forces that are shaping a new world of philanthropy, can traditional charitable institutions prepare for the future, and the expectations that go with it. 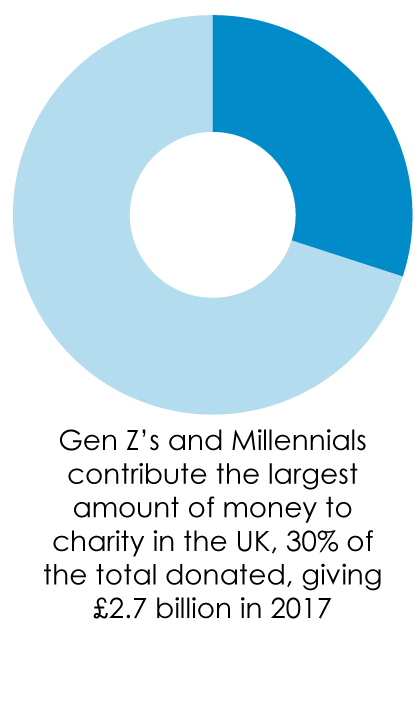 According to the Blackbaud report The Next Generation of UK Giving 2017, Gen Z’s and Millennials contribute the largest amount of money to charity. In 2017 they gave £2.7 billion, 30% of the total donated. This is helped by the sheer size of these cohorts (17 million residents in the UK), but also by the existential angst caused by the economic, political and social impact of the 2007 global financial crisis. This destabilising environment has made them deeply insecure about their place in the world and its future. And it’s not something we can ignore. Social media provides the perfect megaphone to vent their anxiety and ideologies.

It is an exciting time for philanthropy, not just because these idealists are creative and more generous than their predecessors, but also because their digital mastery makes them extremely influential and disruptive and more likely to attract huge funding and support. Since 2012 these so called ‘good’ tech companies have been multiplying by up to 30% year-on-year. The Ocean CleanUp, Simprints and Impossible foods are great examples of how young visionaries continue to captivate investors and talent with their unexpected solutions to world problems. Dutch entrepreneur Boyan Slat founded The Ocean Cleanup in 2013 at age 18, with the aim of reducing the Great Pacific Garbage Patch by up to 50% within the next five years.

Taking a leap of trust

A decade ago these entrepreneurs may have seemed like eccentric dreamers, but trust and faith in technology enabled social enterprise and not for profit is growing. As Rachel Botsman writes in her recent book, ‘Who can you trust’, the whole dynamic of trust is in transition. Institutional trust in traditional top down organisations is waning in favour of a distributed model of trust, which is accelerating due to the rise of peer to peer technology services. Their grassroots beginnings, simple ideas and intuitive platforms creating trust between huge networks of individuals, have ultimately made us more confident to take ‘trust leaps’ into new ways of consuming and doing business. It has caused a total re-evaluation of who we can count on and who merits our loyalty.

We can already see how this phenomenon is playing out in the FMCG sector. Huge margins are being taken away from legacy corporations with $18bn of sales shifting from large multinationals to small brands in the past five years. The likes of P&G and L’Oreal are being outwitted by small, nimble disruptors, such as The Honest Company, Drunk Elephant and Seventh Generation.

These companies are openly rejecting the status quo, and as such are a pure reflection of millennial ideals. They feel intrinsically ‘good’ and act more like passionate communities than companies, creating movements around simple ideas that make an immediate difference to people’s lives.

The staggering growth of these disruptors is also due to very high levels of customer intimacy. They have an amazing ability to garner vast amounts of customer intelligence, so they can serve up a continuous stream of rewarding experiences, perfectly adapted to people’s needs. Which in turn creates sticky brand environments that become impossible to live without.

Definition:
Sticky –
Brands that stick in the consumers’ minds.

What is exciting about good startups such as goDeed, Charitystars and Olio is that they are starting to use similar techniques to create behaviour change at scale, for both the users and service beneficiaries. With their beautiful interfaces, inbuilt transparency at every level, and a more engaging way of connecting people with the causes they resonate with, people feel closer than ever to the prospect of seeing positive change happen before their eyes.

As new business models give people more confidence to solve bigger problems, the line will inevitably start to blur around what is and isn’t ‘charity’.

The future is blurred

Currently these social disruptors seem harmless against the face of Big UK Charity. But slowly they will start to eat around the edges, tapping directly into multi-generational needs, by giving people a lot more immediacy, flexibility, ease, and enjoyment when it comes to giving and doing good. And as new business models give people more confidence to solve bigger problems, the line will inevitably start to blur around what is and isn’t ‘charity’. Simply buying some uber-trendy Warby Parkers, with the knowledge that your purchase has donated a pair of glasses to someone in need, could be considered a valid and exciting expression of doing good.

It’s time to change the model

In his famous TED talk, activist Dan Pellotta talks about the puritanical belief system and ‘double standards’ crippling non-profit organisations from attracting the right talent and solving massive world problems. We expect so much from charity and yet we don’t allow them to have the same foundations as any normal successful organisation. He dreams of a world where charities can harness the same rule book as the economic world, a world ‘where it is ok to reward charities for their big goals and big accomplishments, even if that comes with big expenses’. Looking at the evolving state of the ‘good’ sector, with its many different facets, it is possible that younger generations will be more prepared to tear up the rule book and make his fantasy a reality. They may start to see that creating a lasting impact is completely incompatible with the idea of a charity running with no money, no overhead spending, no advertising budget and no scope for risk taking.

While great leaps have been made in fundraising with young people in the UK, it is clear the majority of charities do not yet fully grasp how to harness their positive and negative energy. The key to making a transition into next generation philanthropy unscathed, is to get under the skin of this cohort, find ways of nurturing their unorthodox ideas, and use their creativity and openness to create impact.
Find out more about Sarah’s work at www.karmarama.com 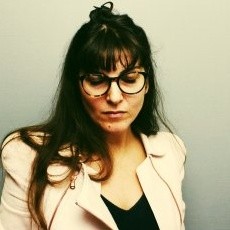