Storytelling: What brands can learn from David Attenborough, Greta Thunberg, Disney and Pixar

Stories matter – that’s why we’ve been telling them for thousands of years. In Frank Rose’s book ‘The Art of Immersion’ he looks into our long relationship with storytelling and explains:

“Anthropologists tell us that storytelling is central to human existence. That it’s common to every known culture. That it involves a symbiotic exchange between teller and listener – an exchange we learn to negotiate in infancy. Just as the brain detects patterns in the visual forms of nature – a face, a figure, a flower – and in sound, so too it detects patterns in information. Stories are recognizable patterns, and in those patterns we find meaning. We use stories to make sense of our world and to share that understanding with others.”

So why are stories so powerful?

Guinness is made of more; Apple thinks differently and Nike just do it. These famous slogans are imbued with meaning that hints to the stories behind the brands. But why does this matter?

The American Author Simon Sinek believes people don’t buy what you do; they buy why you do it and that Brands that clearly communicate their “why” to the world are more likely to realise their ambitions. This isn’t simply a hunch, it has been proven by science. Researchers David Sturt and Todd Nordstrom have analysed data showing that great storytelling can release brain chemicals that motivate people to help. They explain that the better stories we tell, the more likely people are to engage with your cause, the more likely they are to empathise with the characters in the story, and the more likely they’ll be to contribute their effort.

Crafting a good story is hard to do and trying to ensure that people hear your story is even harder. So what is a brand to do? I believe that we can learn a lot about storytelling from looking at influential figures that have told stories that have not only changed the way we think, they’ve changed laws and inspired action on a global scale.

Storytellers we can all learn from

Sir David Attenborough’s documentaries on the natural world have been expanding our horizons for fifty years. Not only was he named as the most popular person in Britain, his documentary series Blue Planet II changed the way in which we think about plastic.

Blue Planet II was the most-watched TV show of 2017, reaching over 14m people. In the last episode of the series, he told us how eight million tonnes of plastic finds its way into our Oceans every single year. This devastating story was told as viewers saw a whale trying to eat a plastic bucket. Series producer Orla Doherty explained that their mission in highlighting the severity of plastic pollution was to help people understand that it didn’t have to be this way, that if people took action now, there was hope for the future of our oceans. The great news is that since the show aired and people understood their role in the story of protecting the future of our oceans, their behaviour changed and they began shunning plastic straws and single-use plastics. In May 2019 the UK banned the use of plastic straws, drink stirrers and plastic stemmed cotton buds.

You may be thinking that it’s easy for David Attenborough to inspire people to take action. He is a character that many of us know and trust as we’ve grown up watching his shows. But what Gerta’s story shows us is that if a story is strong enough, new characters can also inspire and influence people across the world.

Greta Thunberg is a very interesting and inspiring storyteller. If you’ve not heard of her (where have you been?) She is a Swedish environmental activist that has been named as one of the 100 most influential people by Time magazine. She has spoken at the UN Climate Change Conference and has criticised world leaders for failing to act on a climate crisis that is stealing her future.

If you’ve ever watched one of her impassioned speeches you’ll see that she chooses her words carefully. I thought she was simply a great public speaker and storyteller, but learned that she has Asperger syndrome, obsessive–compulsive disorder (OCD), and selective mutism which means that she only speaks when necessary. The following quote is from her speech at the UN Climate Action Summit:

“This is all wrong. I shouldn’t be up here. I should be back in school on the other side of the ocean. Yet you all come to us young people for hope? How dare you! You have stolen my dreams and my childhood with your empty words. And yet I’m one of the lucky ones. People are suffering. People are dying. Entire ecosystems are collapsing. We are in the beginning of a mass extinction. And all you can talk about is money and fairy tales of eternal economic growth. How dare you!”

The power of Greta’s carefully chosen words has created something called the “Greta effect” when last year Ofcom noticed an increase in British children using social media for activism. Greta has been vocal about her disdain for flying. The BBC reported that ‘flight shame’ could halve the growth of global air travel.

It is amazing to think that someone so young could halve the growth of global air travel, but it also illustrates the power of a great storyteller with an important story to tell.

The 22 rules of storytelling to know about

Moving on from storytellers to the stories themselves, Disney and Pixar have crafted some of the most loved and successful stories of the last century. In 2013, Emma Coats, a Pixar story artist revealed their 22 rules of storytelling, of which numbers 4 and 14 are particularly relevant in terms of helping brands better articulate their story:

14. Why must you tell THIS story? What’s the belief burning within you that your story feeds off of? That’s the heart of it.

Why are these so useful? Well a case in point is TOMS – a footwear brand that has a strong story to tell. Here’s how their story fits when you apply the structure outlined in rule 4:

Once upon a time there was an American traveller called Blake Mycoskie. Every day, he loved to travel and dream of his next adventure. One day when Blake was travelling in Argentina, he befriended some local children from a rural village. Because of that encounter, he noticed that they had no shoes to protect their feet. Because of that they created TOMS, a company that would match every pair of shoes purchased with a pair of new shoes given to a child in need. Until finally they’d given 86 million pairs of shoes to children in need and what started as a company has become a movement.

Or how about the example of how one orangutan and a little girl helped Greenpeace tackle palm oil with their 2018 campaign called ‘Ran-tan’. Designed to raise awareness of the 25 orangutans we lose every day due to the destruction of their natural habitat to produce products made using palm oil it used a beautiful animated story, narrated by Emma Thompson, showing an orangutan causing havoc in a little girls bedroom. The point being that the girl learns that the orangutan has no home of her own, with the takeaway message:

“There’s a human in my forest and I don’t know what to do, you destroyed all of our trees for your food and your shampoo”

It can be hard knowing how best to tell your brand’s story but try to think about what you can learn from the likes of Disney and Pixar. When it comes to how you bring that story to life, try to think about personifying your brand. If it were a person, who would they be? How would they speak? This may seem like a silly exercise when you start, but it is helpful in helping to establish the right tone of voice for your brand.

Remember: Great stories and storytellers have the power to change the world

Storytelling plays a fundamental part in building brands and creating compelling marketing campaigns. A great story will help shape the way that people view your brand. If your story resonates with them and you treat them well, you’ll be able to foster a relationship that will one day turn them into brand advocates. Together, these brand advocates will help you realise your ambitions sooner as you’ll be telling stories about your brand together.

Read more by Kimberley in A time of reckoning for charities. She will also be speaking at our Storyfest conference. 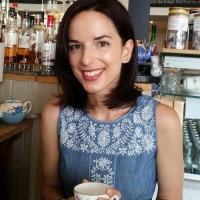 Kimberley is a brand manager at Christian Aid. She launched the Brand Blog as a space to share her expertise, and that of a network of inspirational people to provide a range of resources and advice for the sector during these unprecedented times.