The ethnic diversity of Britain is increasing significantly. According to the 2012 British population census, one in eight people were born outside the UK. For charities, this means their stakeholder base is shifting, offering a chance to tap into this richness for different kinds of opportunities – from volunteers to members, donors and even employees.

At a time when the world is becoming ever more interconnected and interdependent, a diversity strategy is increasingly looking like a strategy for opportunity.

The reality, however, is that charities all too often shy away from this engagement because it seems too complex, too unpredictable and can’t easily be done from the office – there’s a need to go out much more into these diverse communities to understand them, engage with them and increase the stakeholder base of the charity. It may also mean these meetings are held in the evenings and weekends, outside the normal working hours of a charity. Differences in lifestyle and cultural norms can be seen as messy and resource-consuming: a problem rather than an opportunity.

The truth is that most ethnic minorities are actively involved in charities, whether in the UK or supporting people in their home country. Charity is often a key expression of their faith, belief system and culture.

For example, one of the greatest additions to British architecture in the 20th century arose from a Hindu faith community which first came penniless to the UK in 1972 as Ugandan Asian refugees. The BAPS Swaminarayan Mandir temple in Neasden, North London is a huge hub of creativity, education and social cohesion, and itself a registered charity. It draws hundreds of thousands of visitors every year. Why would other charities not want to engage with it?

Too big to ignore

Even if the language, belief, behaviours and methods of operation are different, the audience is too big to ignore. Conversely, a proportion of these community group members may already be service users or beneficiaries of charities where the engagement by the charities may be broad brush and generic. A more dynamic approach, targeted and based on knowledge and information, would provide more engaged and value-based results which could benefit the charity and beneficiary equally.

There are plenty of examples like this throughout the UK: community groups and organisations which are a hive of activity, charity and social enterprise. One obvious need for all charities is funding, and ethnic minorities in Britain are potentially a vast resource for this. Did you know that many community centres cost millions of pounds to build and run, and all the funding comes directly from these communities? Charity is an important core value of culture and faiths, so giving is not an alien concept.

There are active charities within Jewish and Muslim communities, such as Jewish Care and Islamic Relief. In the UK rich list, black and minority ethnic names are a regular presence, and there are separate rich lists like the Asian Rich List. Laxmi Mittal, an Indian, is the richest man in Britain. And he is an immigrant.

Engagement with ethnic minority communities at a leadership or governance level can generate creative and innovative solutions which stem from diverse thinking and experiences. Avoiding such leadership dialogues may lead to narrowness of thinking and replication rather than innovation. Trustees and advisors from diverse communities can bring with them large networks of contacts and expertise which would otherwise be unavailable or unaffordable to charities. Many researchers have demonstrated that diversity is a win-win proposition and not a win-lose one. We need to remove our fears and open our minds to a vast new range of opportunity and possibility.

In practice, when charities do engage with these communities, the experiences are often very positive and fun. For example, most ethnic communities are very welcoming and hospitable to people who are curious about their culture and interested in connecting. For international charities, having people from all over the world living in Britain is a huge asset because they are a vital window of knowledge, contacts and cultural intelligence which can be keys to making projects in foreign countries effective and sustainable.

Here are some practical solutions for engaging with diverse communities:

Diverse Ethics is proposing to prepare a market intelligence report on the Indian diaspora in Britain to help recruiters and marketers understand this community. Interested charities can find out more at http://www.diverseethics.com/atul-blog/indian-diaspora-research 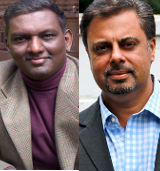