The Chip and Dan effect

I find myself saying “Chip and Dan” a lot at work – mostly to my boss. We will be in a meeting and hear a particularly surprising, interesting story, “very Chip and Dan.”

Chip and Dan are not cartoon chipmunks, but brothers who write business books. Not the kind of business books that make you think, “hmm, this bit might be useful I suppose…” that are badly written and feel a bit like being poked repeatedly in the chest by a braces-wearing businessman. The Heaths’ books are easy to consume, chatty, and make you want to read extracts out to others – even non-marcomms types…normal people!

Take their first work, Made to Stick, which attempts to answer the question "Why is a completely fictional urban myth often stickier than a real health statistic that affects our lives?" It has a mnemonic – SUCCESs – which stands for Simple, Unexpected, Concrete, Credible Stories.

It’s a superb read, and the aside-making, un-pompous style around each crisp piece of evidence is hugely refreshing if you’ve just read ‘10 Reasons the Competition Sucks and How To Crush Them’, or whatever the shouty businessmen are reading at the moment. The illustrations of communication issues are based on proper research, briefly told and highly memorable.

For instance, Made to Stick talks about the "Curse of Knowledge" – the problem of really knowing your stuff, which leads to instinctively dishing out impenetrable jargon to innocent members of the public. To illuminate the "Curse of Knowledge", the Heaths describe an experiment held at Stanford University called tappers and listeners – a psychological test in which someone taps on a table with their fingers to the rhythm of Happy Birthday To You the other person has to guess what the tune is. They almost invariably don’t guess correctly.

The tappers only got their message across 1 time in 40. When a tapper taps she is hearing the song in her head. What a great analogy for the blind side of expertise – when we think we are making sense, but only we are hearing the tune. This is an important lesson when talking to authors about writing for the web.

I arrived at Rethink Mental Illness as a confirmed fan and was very pleased to find that there were also other fervent Heath enthusiasts here. Since finding them I‘ve used a bit of Chip and Dan in just about every report or presentation. We refer to bright spots a lot – this is the philosophy of not asking what's broken and how do I fix it?, but instead what's working and how can we do more of it? – this is from the Heaths’ second book Switch, that actually makes the subject of change management interesting!

Our anti-stigma Time to Change programme, a partnership between Rethink Mental Illness and Mind, does just this. We focus on positive action, asking people to simply talk more about mental health, rather than berating everyone for using words like “crazy” or trying to fix the remaining hardcore bigots. We now have tens of thousands of pledges from individuals and large organisations.

The secret of the Heaths’ SUCCESs lies not in the mnemonics but the storytelling. They practise what they preach, so even long after putting down Switch I remember the tale of how someone saved a rare Caribbean parrot by single-handedly making it a symbol of St. Lucian national pride, or how a New York Times writer found that her husband and some skateboarding monkeys shared the same fundamental motivation (you’ll have to read the book).

So what have we found is made to stick? The fact physical health is a life-threatening issue for people with mental illness is a plain fact, sadly for us at Rethink Mental Illness it sometimes seems there are more memorably sad stories than bright spots – but hopefully by bringing the issues home, they linger and motivate more people into positive action. 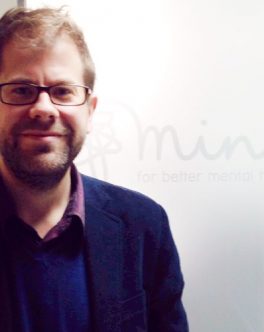