The not-so-new world of virtual reality

Everyone’s talking about it, but what is virtual reality and how can charities use it?

People have been experimenting with virtual reality (VR) since the early 1800s when panoramic paintings became popular. Entire rooms were painted with an extended scene to give people the perception of seeing at 360 degrees. These days, virtual reality simply means the use of technology to create the illusion that we are present somewhere we’re not.

This isn’t the first time virtual reality has been predicted to hit mainstream but 2016 is the first year the technology has become an affordable home purchase, which means private sector businesses will be swift to capitalise on it. In fact, virtual reality is predicted to become a £700 million market this year alone. And this time we’ve got the world’s biggest technology and development companies actually launching headsets; PlayStation, Facebook, HTC and Microsoft all have VR headsets available to buy right now, ranging in price from £300 – £3000.

How charities can use virtual reality

For a number of years, charities have used images and video content to get people’s attention and experience life through someone else’s eyes, triggering empathy in potential supporters. Virtual reality is the next level of this, because it enables supporters, influencers, even resisters, to immerse themselves in important real life stories. Think of it as a middle-ground between flat 2D video, and physically putting a supporter on the ground in a refugee camp or in a dementia care ward, for example.

Practically speaking, VR technology can be a content marketing tool deployed in fundraising appeals, awareness campaigns, supporter comms and more. Some charities are already experimenting. Amnesty International UK ran a street appeal last year to raise money and awareness about barrel bombs in Syria, in which they trialled VR. 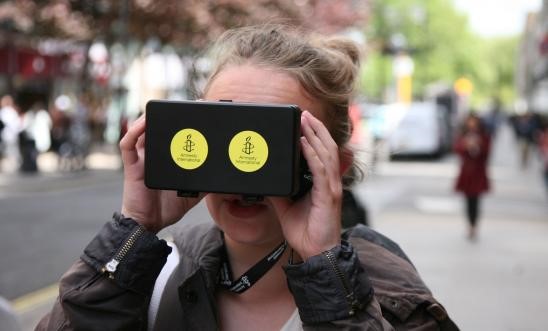 They used low-cost VR headsets at about £20 a-piece, a smartphone, and some photos collected by volunteers on the ground in Aleppo. The costs of the trial were surprisingly low, and in the first week there was a 16% increase in sign-ups on the street. They also reported more people stopping to talk to the campaigners.

If deploying high-tech virtual reality seems a bit far-fetched for your budget, the good news is there are some stepping stones. Facebook and YouTube now support 360 video, which means you can create a 360 video using a special camera, and it will work on the two largest video sharing networks in the world.

On the hardware side of things, you can try out ‘Google Cardboard’, which is a low cost, lightweight DIY headset that works seamlessly with your smartphone to let you experience virtual reality on the cheap. You could bulk order Google Cardboards or download the template and build them yourselves. Why not send your top tier change-makers/opinion leaders their own Google Cardboard headsets and direct them to a link where your virtual reality experience is waiting to be viewed. The cost of a VR project could be shared between fundraising, comms, and major gifts team.

Virtual reality alone isn’t going to galvanise people into action, but it’s an innovative way to get people to think differently about your cause. Charities have some of the most important stories to tell, making them the best placed organisations to put the reality back into “virtual reality”.

Ashleigh leads on digital strategy and services at Forster Communications, a social change agency. Keen to get charities on par with the private sector, she uses her years of commercial experience to create positive change.