The press release is in the bin 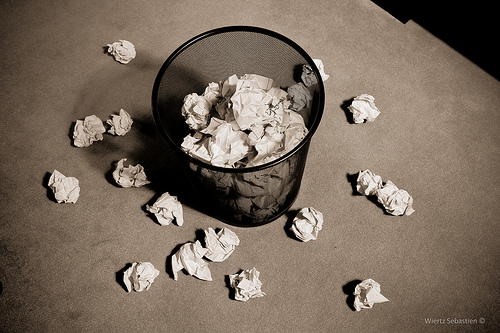 Here’s a little secret. At one radio station where I worked in the 1990s, the fax machine was situated above the bin. Yes, faxes went straight into the rubbish. As busy producers, we were happy about this. If a comms person rang and sold in a good story, we’d retrieve the relevant press release, wipe off the tea stains and put the item to air.

It can be hard to place stories, but have you ever had one nut that you’d like to crack? You know: the publication, TV programme or website where you really feel your message would sit perfectly, only for your pitches to those media organisations to fall on stony ground?

There’s no simple solution. But I do think it’s really worth working out what the media outlet wants. I have sometimes been on the receiving end of an email that someone’s forgotten to bcc and it’s been an advert on how not to approach the media. Every conceivable media organisation has been included on a story when 90% shouldn’t have been. One trick I learned from a manager at Turning Point was to go and meet journalists. I just see them for 20 minutes: they can find out what I have to offer, but I think more importantly, I can find out what’s on their agenda so I don’t waste their time with misguided pitches.

I’ll come clean about one of my personal stony ground issues. My son Stan has Down’s Syndrome and I wrote a book which talks about the joys of parenthood but also the challenges that learning disability brings. It’s warts and all. On publication in 2014, I pitched with that angle to some tabloids. They didn’t like it. They wanted a heartwarming outcome. It was disappointing because I wanted to sell in a key message about how life is more complex and rewarding than merely providing ‘inspiring’ moments.

And then, a couple of weeks ago, actress Sally Phillips was on a BBC2 documentary asking what a world would look like without Down’s Syndrome, because many more people are having terminations as testing technology advances. The Sun newspaper found me and asked me to comment. The online version is here – Stan and I are about three-quarters down. What I told The Sun I found difficult to say; but it was an opportunity to raise the issues I want to with a big audience that I haven’t spoken to before.

Now I’m ashamed of myself. Because, in 2014, once the tabloids had turned me down I didn’t try, try and try again. Ironically, in the end, it was they who found me and they got my message across! I suppose I was engaging in what one of my trustees, Ossie Stuart, describes as unconscious bias, in that I gave up at the first attempt, assuming that their response would always be like the one I first encountered.

So, back to that fax machine hanging over the bin. How would I, the comms professional, have pitched to myself, the rushed radio producer? I’d have picked my time, I’d have been persistent (without being annoying) but I’d have really got to know what it is he wanted so that I was in a better position to provide it. And then you never know. The fax might have come out of the bin.

More like this
Have a look at Becky Slack’s book on effective media relations for charities, and this extract on how to make friends with journalists

Find out about the PR Network, group for professionals working in PR and media in UK charities and not-for-profits (free and exclusive to CharityComms members)

Steve's current communications work concentrates on supporting SCIE to achieve its business goals. Since 2003 he has worked for charities dealing with substance misuse, mental health, learning disabilities, volunteering and wider social care. Steve was previously at the BBC and before that he had another career at Trailfinders Travel. He is also an advocate for rights for people with learning disabilities. Steve’s written a ‘warts and all’ book about his son entitled Down’s with the kids. Steve supports Stoke City and enjoys getting muddy at summer music festivals.
Tweet
Privacy & Cookies: This site uses cookies. By continuing to use this website, you agree to their use.
To find out more, including how to control cookies, see here: Cookie Policy