#Type1derWoman: uniting supporters with a hashtag

We wanted to thank our vibrant and supportive community and raise awareness of female figures in type 1 diabetes care, support and research by celebrating their achievements. By using Mothering Sunday and International Women’s Day as launch days, we were able to create a unifying campaign to celebrate female champions in the type 1 diabetes community from all walks of life.

Mothering Sunday and International Women’s Day fell within three days in 2016. This gave us a perfect opportunity to thank all women and girls who inspire those living with type 1 diabetes.

The life-saving mums and life-changing researchers

Initially, the campaign focused on Mothering Sunday. We, along with our supporters, gave a shout out to the type 1 diabetes ‘super mums’ who in many cases quite literally keep their children alive every day. As mothers of small children with type 1 diabetes they – along with other family members, both male and female – must check their child’s blood glucose levels and inject life-saving insulin.

We worked with the award-winning PR company Third City, who offered their support pro bono, winning us coverage in the Metro with the headline “Let's hear it for diabetes super mums”.

We then turned our attention to International Women’s Day, allowing us to broaden our campaign beyond mothers. We celebrated other female family members and friends, female researchers looking for ways to cure, treat and prevent type 1 diabetes, and the often unsung heroes in type 1 diabetes healthcare.

Communications professionals are often confronted with statistics that show anger is the most potent emotion to stir if you are looking for media coverage and social media engagement. But our campaign succeeded by tapping into strong emotions of love and gratitude; highlighting the support from women and girls in their lives was relatable to all our supporters. We also used emotionally potent case studies which were overwhelmingly positive and celebratory. This tone was matched in the wonderful response from our supporters. 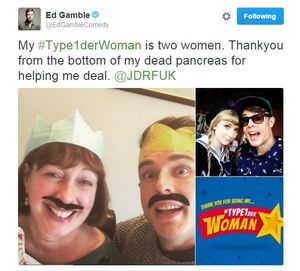 The theme allowed people to thank and raise awareness of the practical and emotional support received from loved ones every day.

It also gave people the chance to thank those who they do not know but to whom they owe so much – the ground breaking female researchers who are working to cure, treat and prevent type 1 diabetes, and the women and girls raising thousands to support this research.

The campaign saw people from all ages, backgrounds and from both sexes naming their #Type1derWoman, with those named including everyone from toddlers to researchers, to diabetes nurses and the mothers who founded JDRF in the 1970s. 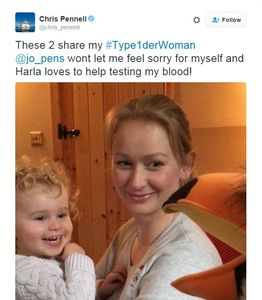 The national media coverage in Metro was matched by superb media metrics – the campaign appeared in articles in papers across the country, achieving a reach of well over three quarters of a million.

By the end of the ten day campaign, the hashtag #Type1derWoman received almost three million impressions. There was also an audience reach of over one million people. Comedian Ed Gamble and international rugby star Chris Pennell, who both live with type 1 diabetes, also nominated mothers, daughters and partners as their #Type1derWoman.

The low budget campaign proved the benefits of pursuing a simple, common and positive connection to create a unifying campaign. It also inspired us to salute the gents tackling type 1 diabetes too – we ran a #T1Dude campaign for Father’s Day in June.