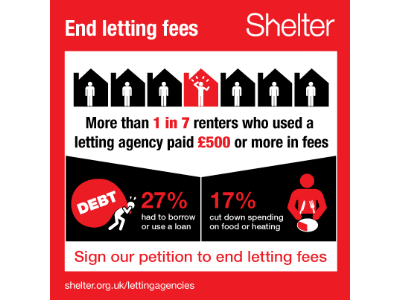 Last week Chancellor of the Exchequer, Phillip Hammond, announced in his Autumn Statement that the government would be banning letting agent fees for tenants.

Just a week before, few would have predicted this. For years the idea of a ban faced political reluctance and very vocal opposition from industry. So how did we get from there to the win we’re celebrating now?

Our services, supporters and surveys first began throwing up that this was a major concern for renters in the early 2010s. Which?, the Resolution Foundation and the Office of Fair Trading all looked in general at letting agent poor practice but the issue – and fees specifically – was not yet on the political agenda.

2013 – The strategy and campaign launch

Despite people’s anger on the issue, we made sure the strategy was hard-headed and focused on winning. And like with almost everything else, we knew evidence of the problem alone was insufficient to shift things.

Although one in five of us now rents privately, renters aren’t seen as a powerful voter group. We therefore had to amplify and concentrate the power they have, demonstrating this was an issue for all renters – not just the poorest. It also meant focusing on those geographic areas where renters are numerous enough to make waves. Finally we had to show this solution was simple and cost free for the Exchequer.

With this in mind we stated by experimenting with a media-friendly mystery shopping investigation revealing the extortionate fees tenants were being charged, and a social-friendly comic video imagining how customers in a coffee shop would react if they were met with hidden charges. We used every moment as a chance to recruit thousands of renters to the campaign.

At the same time we released a policy report calling for a ban and conducted parliamentary lobbying in support of John Healey’s private members bill, calling for better competition, choice and standards in the letting agents industry. By the end of the year we had raised sufficient awareness of the issue and were supported by renters, the media – and even some MPs – but the battle was far from won.

We were able to release evidence showing banning fees in Scotland in 2012 did not cause a spark in rents as many feared. Fears were vocalised again last week, but which we were able to rebut with clear research.

We worked to try to get an amendment to the Consumer Rights Bill to ban fees. And although we weren’t successful, the act did bring in transparency requirements meaning that letting agents could be fined for not displaying their fees properly.

With lots of other organisations picking up the mantle, including Citizens Advice and Vicky Spratt at the Debrief, we were able to take a step back from public campaigning to concentrate on making the policy case behind the scenes.

This included continually pushing the ask as part of our wider efforts on improving the private rented sector and showing that more modest reforms weren’t working, intensive engagement with a government working group on improving renting and supporting Baroness Olly Grender on her private member’s bill.

It’s impossible to include all of the tactics, people and organisations that led up to last week’s campaign win, but we can draw some important lessons for future campaigns.

As demonstrated above, Shelter were not alone in achieving this. Thousands of people joined Shelter’s and other’s campaigns and made the momentum unstoppable. The changes wouldn’t have happened without Citizens Advice, Debrief, the Resolution Foundation, Which? and many others. These changes also needed the support of pioneering private landlords, companies, journalists and, of course, politicians.

2. Campaigning works. Especially when you focus on what wins

Seems obvious, but you can doubt it sometimes. It’s easy to fall into the trap of self-indulgent, self-righteous and ineffective shouting. Shouting is fine, but only if it helps win. Last week’s win stemmed from hard-headed consumer campaigning strategy and policy thinking. They involved a lot of vocal campaigning, but also behind the scenes constructive discussions with government and the industry too.

Our politics is far from perfect, but big change often needs it. Despite this, campaigners can too often easily slip into a lazy and dangerous anti-politics. On this issue various Labour and Liberal Democrat politicians deserve credit for putting the issue on the table before the last election, as do various Conservatives and civil servants who’ve been making the case more recently, driving last week’s change. While “charity campaigners need not be partisans in politics, we should always be partisans for politics".

4. Strategy is a shared exercise

If I’m honest, and if it were solely up to me, I’m not sure Shelter would have started the letting agent fee campaign when it did. I was worried we couldn’t win on this and other fronts at the same time. Thankfully many other people at Shelter at the time thought otherwise. Good strategy doesn’t just need a good variety of voices for buy in, but to make it stronger, and on fees I’m very happy to have been proved wrong.

So whilst we still have a long road to travel in our mission to end bad housing and homelessness, last week made me ever surer we can get there.

Last week was a big win for all the renters who will no longer need to pay extortionate and unnecessary fees every time they move. And it’s an even bigger win for the people who won’t now face £500-700 letting fees tipping them into a spiral of pay day loans just because they’re finding somewhere to live. Less significantly, but still importantly, it’s also a win for the power of campaigning too.

More like this
Join the Campaign Network, a forum to share, learn and collaborate with campaign peers (exclusively for heads of campaigns working in UK charities and not-for-profits with a turnover of more than £2 million).

Roger joined Shelter in 2010 before becoming director of communications, policy and campaigns in 2013. Before that he was Senior Policy & Public Affairs Manager at the Joseph Rowntree Foundation.