Your comms predictions for the next decade

The last decade has seen a vast change in charity communications – but what lies in store for the next ten years?

Earlier this year, as part of our Communications Benchmark 2017, we asked charity communicators to give us their predictions for the future. You were hopeful new technology could give charities an edge, but warned of the dangers uncertainty might bring in a “post-truth” world. Here are some of your predictions:

While communicators are confident digital technology will continue to change the world (with social media “taking over completely”) some also predict the rise of less established tools like virtual reality, augmented reality, biometrics, blockchain and chatbots. You also highlighted the emerging importance of big data and faster and easier donation methods – like contactless. 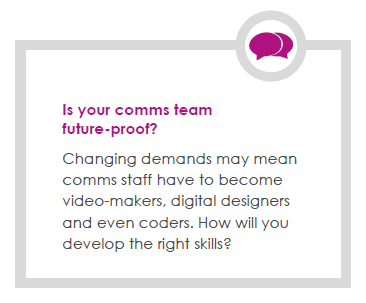 The public will get less receptive

Communicators are already recognising that multiple channels, along with more competition, make it harder to cut through the noise. In the future, you predict it won’t get any easier.

The rise of “post-truth”

Some communicators believe the future might be as much about trust as it is about evolving comms tools. This reflects a perceived lack of trust in charities in general, plus a “fake news” environment where audiences pre-select content which matches their worldview.

While recent change has been about the tools we use, especially digital, the future looks to be more about trust. Not just the lack of trust in charities fuelled by the media, but a lack of trust in general. How do we change minds and behaviours when there is such willingness for people to go and find and share opinions they agree with? 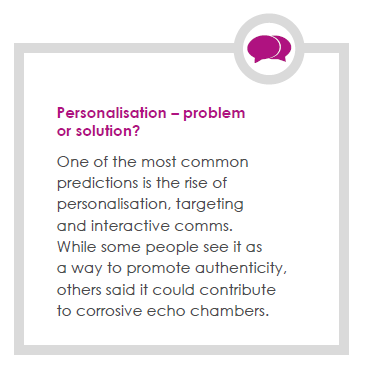 Solutions you suggested included new technology giving people the power to instantly fact-check content, charities being more transparent and accountable to the public to build trust, and even a move back to trusted offline sources.

The rise in issues around privacy, coinciding with incoming General Data Protection Regulations, is also predicted to have a big impact on the next decade of communications. You believe this could mean more red tape and a reduced ability to harness data, plus a more rigorous focus on privacy and permissions. 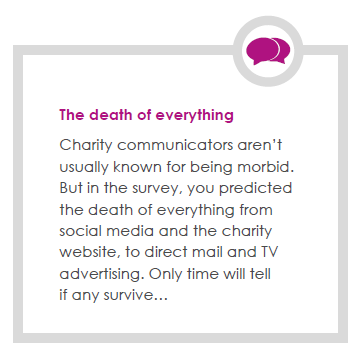 The move to mobile

In recent years, mobile has been growing at the expense of desktop – and you’re convinced this trend will only accelerate.

Our YouTube channel has 65% users on tablets and mobiles. Two years ago it was 65% on desktops! If it doesn’t work on a phone or tablet, forget it – especially for a charity that predominantly works with people under 35.

Whatever happens in the coming years, our sector will still need passionate people dedicated to telling life-changing stories. With this in mind, the comms team’s place seems secure in the changing charity landscape, as a widely-respected, effective part of how charities do good.

Download your copy of our Communications Benchmark 2017 report here. 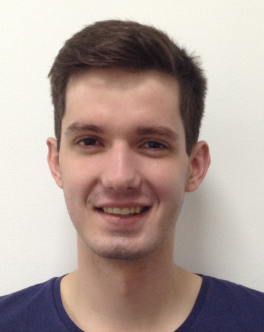 Duncan left CharityComms in 2018 to pursue an MA in Public and Social Policy. Over three years at CharityComms, Duncan moved from communications officer to project manager, successfully delivering projects such as the new-look Digital Benchmark platform and Communications Benchmark 2017 report. Duncan also volunteers with Turn2us to support people in need to gain access to benefits and grants.