How Blood Cancer UK launched a brand in a pandemic

When I started as Head of Brand at Blood Cancer UK (then Bloodwise) the charity was facing a tough dilemma. It had changed its name twice in less than 10 years, the Bloodwise brand was under five years old and brand insights were telling us most people thought the charity was about blood transfusion, rather than blood cancer. The general feeling was that the brand was holding the charity back. But a third rebrand in 10 years is a risky thing to consider. Clearly, we needed to start by evaluating the current brand to work out what we needed to do next.

How did we set about it?
We needed to understand the depth of the issues – we had a lot of anecdotal feedback, but not much evidence to back it up. So we conducted research amongst both the general public and people affected by blood cancer to gather robust evidence that would paint a picture. Here’s how:

The evidence gathered backed up the anecdotal feedback: our brand wasn’t fit for purpose and the Bloodwise name was really holding us back.

With this evidence, the way forward was clear, but there were significant challenges involved. The biggest of these was how to take supporters with us. We knew supporters didn’t feel that they had been sufficiently involved in the previous rebrand, so we had to involve and update them on this project as much as possible.

Creating a comms plan to set out the milestones for communication and engagement, beginning with communicating the research findings to our audiences became essential. This was a sensitive subject and an email just wasn’t going to cut it. So Chief Executive, Gemma Peters, recorded a video update to communicate the key themes that had come out of the survey and invite people to a series of UK-wide and online workshops to discuss the findings in detail. The open and click rates for the email were amongst the highest ever and this set the bar for how we would communicate with our audiences throughout the brand development.

Workshops then gave opportunities to present back to our audiences the findings from the survey – what they had told us the problems were. This and other research findings engaged them in discussions around a rebrand, including a potential name change. There was, understandably, a lot of concern around cost, but the vast majority of those attending
workshops felt we couldn’t afford not to rebrand. But they were also clear: this one had to work.

All this information – from the information gathered from the survey and the workshops – laid the foundation for the brand strategy and gave valuable insight for the creative brand development. By evidencing this in ongoing communications with our audiences and asking for their feedback at key decision points, such as whether or not to change our name, we kept them engaged right the way through the project. The final piece of evidence we needed, though, was proof that it would work (or as close as you can get!). So we tested the brand with a robust sample of warm and cold audiences of people affected by blood cancer. The results were overwhelmingly positive and final YouGov poll testing with a larger nationally representative sample gave us the final evidence needed to take the proposed brand back to our audiences for their reaction. They loved it (with a couple of exceptions – you can’t please everyone!) and wanted to know how soon we could launch it.

Dealing with the unexpected
Shortly after we’d sighed a breath of relief and headed into the implementation phase, news of a new coronavirus in China hit the media.

Little did I know what as to come… PIVOT!

As the news closer to home became more alarming, calls to our helpline increased ten-fold. People with blood cancer were about as vulnerable as you could get to the virus. The film and photoshoots we’d lined up were put on hold and there were emergency meetings about whether we should go ahead with the brand launch. We had fewer assets than planned, no brand film and were living in a global pandemic. But rebranding was all about bringing clarity to the charity, so we could reach, engage and support more people who needed us. We couldn’t do that with the existing brand – we had to change.

The decision was made to go ahead and we actually launched a day early, due to a timely TV appearance by our CEO. We switched over and had a Teams social – it wasn’t the day we had planned, but we had far more important things to do.

There was no brand campaign ready to go, but it wasn’t what our audiences needed at that time. They needed us to be relevant. They needed to know what the latest relevant coronavirus information meant for them. They needed us to live the brand, not promote it through a campaign.

We diverted staff from their usual roles to be trained up to answer support line calls (as the daily number of calls was matching our usual monthly figures). We set up a daily coronavirus stand up to share the latest news and themes coming through support line calls so we could decide how to respond to those needs. We ran on adrenaline, caffeine, daily team check ins and Friday night socials. It was a whole organisational effort and staff were exhausted but more motivated that than ever.

We still haven’t had a brand campaign and yet awareness has increased, both amongst people affected by blood cancer and the general public. There’s significant increase in sign ups to our e-newsletter and in followers across all social channels. We’re getting media requests, which never really happened with the previous brand and we’ve seen unsolicited donations for the first time in a long time.

It may not have been the launch we planned, or hoped for, but the pandemic made us think differently, be audience-focused and be brand-led in both thinking and decision-making. There are big challenges, having had to cut our staff by 25% due to a drop in income, but with a stronger brand we’re confident we’re in a far better position to weather the storm.

This case study is part of the CharityComms Brand 360 Best Practice Guide. 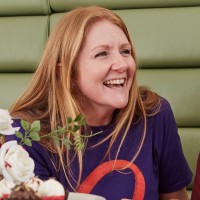