How working with celebrities can help amplify your message

Working with celebrities or influencers can hold great benefits in spreading your charity’s message and bringing awareness to new audiences, allowing you to reach their followers. These relationships can also open up opportunities to new channels and media outlets.

At The Salvation Army, we advocate for survivors of modern slavery and provide specialist support to help them rebuild their lives. It is a complex issue which remains misunderstood, underestimated, and needs to be introduced to people carefully. Hearing from high profile but familiar faces can really help cut through. That’s why when the opportunity arose we started working with ITV’s Coronation Street, and actress Ruxandra Porojnicu on a modern slavery storyline.

Here is what we learned…

Our experience of working with Ruxandra came about organically. When Coronation Street’s team first got in touch, they were researching a planned storyline about modern slavery. They were determined not only that the story would be realistic, accurate and sensitive to genuine experiences, but also that it could make a difference in combating this horrific crime.

We offered to assist with the meticulous process of checking proposed plots and dialogue, as well as briefing actors. Ruxandra Porojnicu, at that time a relatively unknown actress from Romania, was cast as ‘Alina’ who was being forced to work in a nail bar for little or no pay under threats of violence to her and her family. To help Ruxandra prepare for the role we arranged for her to meet someone who had survived modern slavery.

Once this connection had been made and it was clear Ruxandra had a genuine interest in modern slavery, we continued to provide her with materials to help in building her understanding of modern slavery. We shifted the timing of a planned awareness campaign to late summer to coincide with key moments in the Coronation Street story, all made possible because they were willing to share advance broadcast schedules with us.

Bring them on board with your organisation’s goals

In the early stages, we met face to face to discuss options for working together. These meetings were paramount in building a strong rapport and for Ruxandra to gain a deeper understanding of our organisation and aims. This meant, as we moved forward together, both parties were clear on the mutual benefits.

Ruxandra recognized that having arrived from Romania in London as a young and inexperienced actor, she had once been vulnerable to the false promises of work that had entrapped her character ‘Alina’. So she was keen to prevent other people from falling foul of criminals operating modern slavery networks. From a practical perspective, these early meetings also helped us discover how she felt most comfortable and when she could support us given her other commitments. When dealing directly with Ruxandra, we limited contact to one person in our organisation. This helped build a more personal connection and streamlined the process, so she was never overwhelmed by requests or contact.

As ‘Alina’s’ story drifted from the headlines, Ruxandra’s profile continued to grow as she became a show regular and as she remained committed to campaigning on modern slavery the messages she posted in support of our campaigns reached ever larger audiences.

For the Salvation Army much of our awareness activity centres around Anti-Slavery Day in October. We’ve worked with Ruxandra for the past two years to promote our #WeAreNotForSale campaign which asks the public to stand in solidarity with survivors of slavery by buying and wearing a special edition temporary tattoo and sharing it on social media. By this stage, Ruxandra was also keen to fundraise directly and, learning that we had London marathon places, took up the chance to fulfil a lifelong ambition to run. This not only raised valuable funds but was instrumental in encouraging other people to sign up for our challenge events.

Give plenty of creative control

Having ascertained how she prefers to work, we give Ruxandra plenty of notice of our plans, so she knows what to expect. This has included sharing draft scripts in advance so she can become familiar with the content and has the freedom to adapt to her own style. She has lots of control throughout the process including the final sign-off on all assets.

We have tried to keep requests infrequent and we aim to maximise any time she gives us by collecting as much material as possible on each occasion. For example, when she agreed to film a short video for the #WeAreNotForSale campaign, we hired a photographer to take high-quality still images and brought branded running equipment to get photos for her London Marathon fundraising. This provided us with content that we’ve been able to use in the long term to promote, events and other fundraising opportunities.

As this relationship continues over time we maintain a light touch, open door relationship, where we feel comfortable to make requests but not asking for too much, too often. By following her social media channels, we can get a sense of her work schedule so, for example, if she is working away from home, we know it isn’t a good time to make contact.

The opportunities are endless

Knowing that Ruxandra is an informed, reliable and committed supporter saves time which might have been spent chasing down fruitless rabbit holes trying to secure celebrity partners. For our supporters, it builds strong connections by presenting a familiar face to help communicate messages around this sensitive issue. This relationship has generated media coverage in titles which might not otherwise have covered modern slavery such as TV and soap opera media outlets – Digital Spy, OK! and entertainment news from national news outlets such as The Sun. Ruxandra’s alignment to modern slavery and her support for The Salvation Army regularly crops up in her media interviews which has generated a sustained impact over time. Her support has also increased social media presence for successive awareness campaigns and fundraising opportunities as Ruxandra’s own profile has grown. 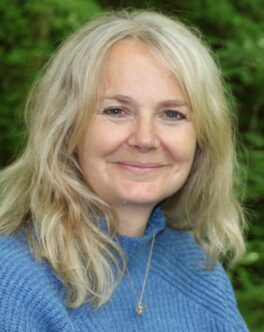 Isobel McFarlane works within The Salvation Army’s PR & Communications team to support awareness-raising around modern slavery and the charity’s work in supporting survivors.