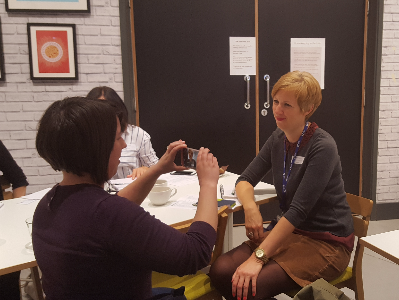 At this meeting of the CharityComms Midlands Networking Group we found out how to create compelling video content on a shoestring.

During this hands-on session, we covered the basics of planning, shooting and editing, using just a smartphone and free editing software, to create effective videos that look good too. Delegates had the chance to plan and practice filming short video blogs and interviews on their smartphones and got expert feedback on the spot.

The session was led by former TV development producer Liz Bell, and featured guest speaker Susan Jones, an award winning filmmaker and former series producer for ITV Central. Susan has run her own independent production company since 2007, Redhead Business Films, which specialises in bespoke promotional videos made to television production standards. Her two YouTube channels have had more than eight million views and have over 3,000 subscribers.

Why video? An exploration of video content and how you can best use it
Liz Bell, freelance communications consultant, publicist and copywriter and former TV development producer

About the Midlands Networking Group

The Midlands Networking Group is a network of comms professionals working in UK charities and not-for-profit organisations in the Midlands.

You’ll be given the opportunity to meet your peers, compare notes on workplace practices and share successes, ideas, challenges and inspiration. The group is designed to encourage networking and peer-to-peer support, sharing issues in a ‘safe’ and relaxed environment.

Each event will focus on a topic which delegates will discuss in small groups before feeding back to the group as a whole. There’ll also be plenty of time for networking.

In between events, stay in touch with your peers by joining our Facebook Midlands Networking Group.