Every charity dreams of their campaigns going viral. Last month it happened to us at Rethink Mental Illness – not once, but twice.

Our campaign aimed to raise awareness about schizophrenia, and promote a message of hope – that even with severe mental illness, there’s a good chance of recovery.

Fronting it was Jonny Benjamin, who’s done a lot of video blogging about his own experience of living with schizophrenia. Jonny nearly took his own life a few years ago. He was stopped by a stranger, who saw him preparing to jump off Waterloo Bridge and talked him down.

Six years on, Jonny wanted to find the man who saved his life. We worked with him to launch a media and digital search. We all agreed that it seemed unlikely we’d succeed, but it was a good way to get people talking about important issues.

We developed a multi-channel campaign, incorporating broadcast interviews, newspaper coverage and digital content on our website, to be shared on social media, including a video appeal by Jonny.

His first interview was with ITV Daybreak. I was beside him on the sofa when he told Lorraine and Aled about his search. As they wound up the interview, I reminded them to ask their viewers to tweet our hashtag – #findmike. Both presenters, each with hundreds of thousands of followers, immediately tweeted it themselves.

Within hours, #findmike was the top trending topic on Twitter in the UK. Not long after that, it was trending in South Africa and Australia. By the next day, most of the UK papers were running pieces, and Jonny was on Daybreak for the second day in a row. Our website received five times its usual number of visitors. We got 5,000 new Facebook likes and 2,600 new Twitter followers. It was the most successful campaign we’d ever launched.

And then came the news we had barely dared hope for. Ten potential candidates had been in touch.

We knew we had to handle this carefully. It was proving an emotional journey for Jonny. His conversation on the bridge had been quite a blur, and he couldn’t remember much about his Good Samaritan. We didn’t want to get his hopes up unnecessarily, so we needed to be sure we had the right man. But one of those who contacted us sounded remarkably like “Mike”.

His name was Neil Laybourne. Some of the details he mentioned when we met him matched with things Jonny remembered, but hadn’t publically discussed. We went to see him without Jonny and filmed the meeting. When Jonny saw the film, he was pretty confident we had the right man, so we arranged for the two of them to meet. There wasn’t a dry eye in the house, as Jonny finally got to do what he’d been hoping to do for six years – to hug “Mike” and thank him for saving his life.

Our search for “Mike” had gone around the world, but it turned out he worked just a few hundred yards from where he and Jonny first met. Neil walked across Waterloo Bridge to work every day, and had often wondered what had become of Jonny. 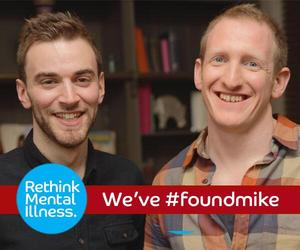 And so began a second round of media interviews, another interview on Daybreak, another day of record numbers of hits to our website, and now #foundmike was trending on Twitter.

So what were the ingredients which made this such a compelling campaign? Undoubtedly, Jonny himself was crucial. He’s good looking, articulate, and dispels stereotypes about schizophrenia just by talking. His story was personal and compelling. More importantly, it offered a straightforward call to action; a way for people to get involved, as well as a possible reward – by sharing his story, would you be the one to help him find “Mike”? And, unusually for a mental health campaign, it was a genuinely heartwarming good news story on an otherwise gloomy January day. Neil’s generous willingness to join Jonny on the interview circuit and tell his side of the story also helped, as did the obvious warmth between the two men when they spoke.

We planned the campaign carefully, and made sure we had everything ready before we launched it. We were also very lucky that so many things fell into place at once. Now the question we’re asking ourselves is – how on earth do we follow that? 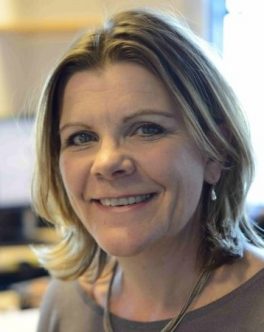 A former health correspondent, Jane worked for the BBC in both freelance and staff positions for over twenty years. She leads Rethink's work to ensure that decision makers hear the voices of those affected by mental illness.