More charities are using bar codes that can be scanned using a smartphone. KnowHow NonProfit's Damien Clarkson discusses how to use QR codes

QR codes are barcodes that can be scanned using a smartphone with a dowloaded scanning application: instead of copying out written URLs, people simply snap the QR code with their phones and are taken directly to your content. This could be your website, YouTube account or Twitter page – the choice is yours depending on the aims of your campaign.

When used well they offer a low-cost way to engage users with your charity. For example, they can be used to strengthen your social media presence – like the code to the right, which I have created to lead to my Twitter feed. If you have a smart phone, download a QR code scanner – like the Red Laser app or the Tag Reflex app – and give it a try.

Let’s get started with QR codes

Okay, I know QR codes look scary, but producing one is pretty straightforward (instructions below) and they have the potential to unlock a new level of audience engagement. Different ways you could use QR codes include print adverts, direct mail campaigns or outdoor fundraising appeals on trains or buses. When you create QR codes you are able to track scans in the same way you could check a click through on a normal shortened URL link.

With annual growth for the global smart phone market at around 14.5%, QR codes are already starting to become a more common sight on campaigns.

How are charities using QR codes?

In the UK charity sector QR code use is still in its infancy – but I have noticed a few charities starting to use them. Katy Dawe, co-founder of Art against Knives, discovered that the young people she was trying to engage with all had Blackberry phones, and talked to each other through Blackberry’s instant messaging service; @Ourspac_e, a youth-led social initiative supported by the charity, uses a QR code as their logo. Katy’s move to use a QR code as the face of a new charity is a bold one, but one that resonates with the tech-savvy target audience she is aiming to engage.

Other examples of charities using QR codes include Bullying UK with their Click, Create, Print & Share campaign. St Dunstan's included QR codes on promotional banners and flyers handed out to commuters at Liverpool Street Station for their 100K London to Brighton Challenge.

I believe that in the next one to two years QR codes will become mainstream, as the smart phone market continues to grow. With new phones becoming more responsive, we will start digesting more media through our mobiles. QR codes offer a fantastic opportunity to engage supporters with print and outdoor campaigns. By tailoring landing content for those scanning you can create strong reasons why people should scan the code. This could be a 10% membership discount to join an association or group, or entry into a competition to win concert tickets if the scanner donates to your charity after scanning the code.

QR codes – in addition to being a fun and a dynamic supporter engagement tool – will help us better monitor and evaluate the impact of our campaigns in the future. 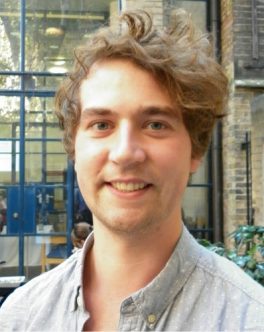 Damien is a social media strategist who has led social media at the NSPCC and worked with charities such as Oxfam and environmental campaign group Climate Rush.