My last word: lessons from six years at CharityComms

“If, once I’ve started, I don’t see the point of CharityComms, would you object to me shutting it down?”

When a panel gets to the point in a job interview where they ask if you have any questions for them, they’re probably not expecting something quite that blunt.

But when I applied for the role of CharityComms director in February 2010, we only had 28 charity members and I wasn't entirely sure what the point of the organisation was.

So I decided to listen. In my first fortnight, I spoke to the comms lead at each member charity and built a picture of what they wanted from our organisation.

That simple exercise gave me the insight we've spent the next six years acting on – the three pillars of CharityComms’ activity:

Actually, although made-up statistics feel very ‘now’ in this post-truth world, we do have some genuine figures which demonstrate CharityComms’ impact. Those 28 organisational members have grown to 562 charities, with 369 individual members and 86 corporate partners, creating a network of over 4,000 people involved with CharityComms' membership. The trustees were right: there was a point to it.

This is reinforced by all the testimonials I’ve heard from members which have warmed my heart over the years. Here are two of my top bits of feedback: 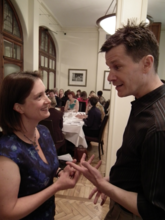 Meeting new people, catching up with old friends, sharing ideas, deepening knowledge, finding fresh insights and swapping stories – no one else can make this happen like CharityComms.

Being a member of CharityComms makes me feel less alone in my role. It has helped me communicate better and, as a result, is increasing my charity’s impact.

You can see some more nice comments straight from the horses' mouths here.

So what have I learned in my six years?

So I’m delighted that CharityComms' trustees took a chance on employing me back in 2010, despite my provocative question. I’m grateful to all our members who have helped create such a strong, vibrant and supportive network that genuinely contributes to the charity sector’s desire to make a difference. And, as a bit of a curmudgeon myself, I’m proud and honoured to have been part of the great team of staff and trustees that can generate a testimonial like this one, my favourite of all:

I’m sometimes cynical about specialised service providers to the third sector, but your organisation is tremendous value and a real force for good.

Thank you all for having me.