Telling you that 800,000 people have read this article is a) a lie… but b) more than likely the reason you’re reading this right now.

The reason for this is an evolutionary impulse behavioural economists call “social proof” and it could well be the key to inspiring action in our supporters.

Over the past month or so there has been a lot of talk in the online not for profit community on how to cultivate action. American “nudge” enthusiast Richard Thaler proposed charitable donations will increase if they are easier to make. Philanthrocapitalism author Michael Green argued that it’s all about the fun whilst Rob Dyson promoted the virtues of gamification.

I’m not going to disagree with them (in fact I love gamification and will, when asked, talk fervently on the subject and recommend some very good books). I am, however, going to throw my hat into the ring and say this – it might be simpler than that.

What if people gave (or got involved, or volunteered, etc) for the same reason you’re reading this – they thought everyone else was doing it? 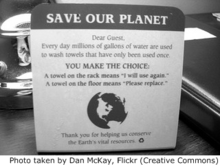 Let’s travel back in time and across the pond to LA in the mid-noughties where a group of three UCLA professors are trying to prove just this. The trio are swapping the “reuse your towel” signs in a local hotel’s bathrooms to ones that include the line “the majority of other guests reuse their towels.”

Unsurprisingly (given that I’m using it as an example) the results were staggeringly positive. Those with the new signs became 26% more likely to reuse their towel – proving that we’ll happily alter our behaviour to emulate the actions of our peers.

That’s social proof – the act of imitating others.

It’s not something you should find particularly new. Museums and street performers (whilst not the most common of bed fellows) have been aware of this for years. It’s why the former will add a little seed money at the beginning of the day and the latter's donation boxes are made of glass. The resulting visible piles of cash show us that others are giving and subconsciously bullies us into doing the same.

Need an example that’s a little more contemporary? Let’s look toward social networks. Facebook is the very embodiment of social proof. If you take a peek at your Facebook news feed right now you’ll likely see examples of the social network nudging you to take action with posts and ads that have been liked by “John Smith and 20 other friends”.

It’s the reason so many people watched Invisible Children’s “Kony 2012” video and Rebecca Black’s “Friday”. I’m not saying that there isn’t pleasure (or interest or enjoyment) to be gained from giving money to a museum or watching Miss Black “sing” but rather that often the initial prompt to take the action is that simply x number of others have done it before.

As a sector many of us are already using these techniques to influence our supporters. If we look closely enough we can see examples of social proof littering the not for profit landscape.

Totalisers – for example, especially in scenarios such as Comic Relief and Children In Need – are reminders that others have performed an action – prompting millions to do the same. Similarly, Child’s i Foundation’s “Buy a Brick” and Unicef’s “Own a Colour” visualise the number of digital donations made by others – clearly identifying a group of people you’re not yet a part of.

It need not be on such a large or complex scale as that though. There are loads of free services out there (including JustGiving Pages and Facebook Events) that will automatically monitor and display the number of donors or attendees you’ve attracted (in real-time) – hopefully stimulating even more to become involved.

On an even smaller scale – social proof can inspire through something as simple as a carefully thought out line of copy.

And this leads me to my final thought: an example from my own organisation, The Blue Cross, where we recently ran a small text-to-donate campaign. After 24 hours we posted a message on our Facebook wall thanking “all of the many kind supporters who have already texted a donation.” The implication was that those who hadn't donated were in the minority and what followed in the next 15 minutes was a flurry of donations that doubled our overall total.

Joe is a digital marketer with a career working exclusively for NFP organisations. He has a borderline obsession with behavioural psychology and how it can affect, motivate and engage digital audiences.