Why winning hearts and minds must start from within

A brand story is much stronger if it rings true within the organisation. So, if you want to connect better with your supporters, dare to start with yourselves.

In 2020, it’s never been more important — yet more difficult — for charities to win the support they need to meet increasing demand for their services. At a time when people’s confidence in the sector has already been shaken, working culture issues are continuing to hinder causes from the inside out.

Take Britain’s biggest animal charity, for instance. It’s said that trust is running low at the RSPCA amid talk of a ‘performance pay’ ultimatum and reports of harassment and bullying. All of which will inevitably cast a shadow over its public image.

If there’s no trust internally, how can charities hope to nurture it among their supporters?

A charity’s most powerful advocates are the people it employs and recruits. Its purpose is nothing without people to embody it; to act on it. Audiences know this.

That’s why the strongest brands and campaigns belong to charities who can evoke a strong human connection between the problem and those who can make it better. (It’s not enough to play the compassion card.) They give people, both staff and supporters, an empowering part to play in their story and their cause.

But what happens when that cause is pursued at the cost of the people devoted to it? Here a charity can undermine not only its staff and supporters, but also its very values. The same values that form the foundation of its identity.

While we’re compelled to work on what matters to us, we also want to know we matter. Yet reflecting on the cultural issues affecting the sector, it’s clear that many people don’t feel they do. Or at least not enough.

Losing people (volunteers included) and funds are two of the top concerns for charity leaders, according to Third Sector’s Charity Risk Barometer report. And there’s a good chance they’re related. Meanwhile, inappropriate behaviour and bad press are cited among the main risks to reputation.

Acknowledge the elephants in the room

So, if you want to win hearts and minds, forget fundraising tactics or supporter campaigns for a moment. The smartest place to start is from within.

It’s about being as curious about your own colleagues as you are about your audiences. Are people in your organisation truly living the story you want to tell about who you are? Are they, whatever their level, exemplifying the beliefs, values and behaviours crucial to fulfilling your purpose? Do they feel they belong?

If not, why not? What stands in their way? Don’t be afraid to acknowledge the elephants in the room.
When peeling back the layers of an identity under review, disconnection in a brand’s narrative can often mean disconnection internally. Siloed teams, poor communication, a lack of participation. Relationships between individuals and teams must be strong enough to support those you want to nurture with supporters.

To flourish, those relationships need an open, empowering working culture where people are genuinely valued and invited to contribute collaboratively. Not the confines of corporate-style targets, unchallengeable institution or unhelpful hierarchy.

Action Aid is one charity that’s recently challenged its ways of working, and not just by introducing shared decision-making. In embodying its feminist vision for young women and girls worldwide, its leaders are creating a culture that “seeks power with others instead of power over others”.

After all, “a charity’s ultimate focus is what difference its behaviours can make to beneficiaries”, as Action Aid chair Marie Staunton so eloquently puts it. And it’s precisely those behaviours that make (or break) a brand.

Rewriting your story from the inside out

For Here, a social enterprise Neo worked with a few years ago, beliefs and behaviours were the bedrock of its rebirth. Before its identity refresh, Here was known as Brighton and Hove Integrated Care Services (BICS). A corporate mouthful of a name and hardly the language of a human, compassionate group of people.

While redefining their purpose and brand with us, the BICS team knew that if they really wanted to offer ‘care unbound’, shaped around the needs of the person, they would also need to reinvent how they worked with one another. Together they recognised that a mindful, people-come-first philosophy made perfect sense to their radical mission. With this, they were able to embed their purpose, and sense of presence, at every level of their operation.

And this is where it becomes exciting for us communicators. If purpose and values are truly lived then identity can be much more than an outward face and voice. Identity is, as progressive leadership author Margaret Wheatley describes, “the most powerful organising dynamic in life”. Therefore it has the potential to be a binding force for everyone — supporter or staff member — who identifies with a charity’s vision and mission.

We also saw this force come to fruition with Global Justice Now (formerly World Development Movement). In a process that involved people from all corners of the organisation, we redefined the movement as an accessible, collaborative and urgent campaigning voice every activist – staff, member or supporter – could get behind.

As the organisation relaunched itself, membership surged. In fact, more new members joined in the first six months as Global Justice Now than in all the previous year as World Development Movement.

Identity has the potential to be a binding force for everyone — supporter or staff member — who identifies with a charity’s vision and mission.”

Addressing brand and culture together

My point is that identity and culture (and strategy) are mutually reliant, inseparable even. Therefore they must be addressed together, as part of a holistic process.

You can’t hope to build a meaningful, trusted brand on top of underlying tensions and divisions. It would be like planting a seed in infertile soil. The result of which is precarious. A surface job without the roots to last or the climate in which to support it.

We have to delve deeper into what makes an organisation tick. To explore honestly every challenge to, as well as opportunity for, growing its presence. And to invite participation at all levels in shaping what it is to live and breathe its purpose.

Imagine the support a brand story could inspire if everyone for whom the charity matters felt like a citizen of, rather than servant to, its cause?

Add your voice to the elephant-in-the-room survey, an independent and anonymous study of working culture and identity, run by Neo in collaboration with Tuff Leadership Training.

Kelly will be facilitating a breakout session on brand and working culture at the Changing Hearts and Minds conference on 5 March, together with Neo partner Tuff Leadership Training. 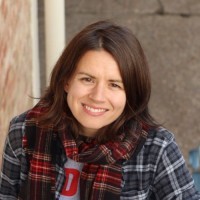 Kelly is a writer, creative strategist and partner at Neo. She and the Neo team are passionate about helping charities create deeper connections through identity, culture and communications. Find out more at weareneo.com.

After 17 years in communications, Kelly’s committed to helping the causes that matter turn ideas into action. As a writer and creative strategist, she’s passionate about using language to unite people around purpose and inspire profound social and environmental change. Last year she edited Hidden Stories, a playful graphic novel moving people to think differently about invisible illness.