Three years ago, the Aid Attitude Tracker was set up to better understand what makes the public engage with global poverty. The research, conducted by Jennifer vanHeerde-Hudson and David Hudson of UCL, has uncovered a number of trends which many charities may find applicable to their own causes.

Polling a representative sample of eight to nine thousand British people every six months, the tracker measures engagement with global poverty by looking at 18 forms of engagement, from high-value forms such as volunteering abroad through to low-value engagement such as reading, watching or listening to the news. The research has found that all forms of engagement tracked have been on a downward trend over the past two and a half years. For example: 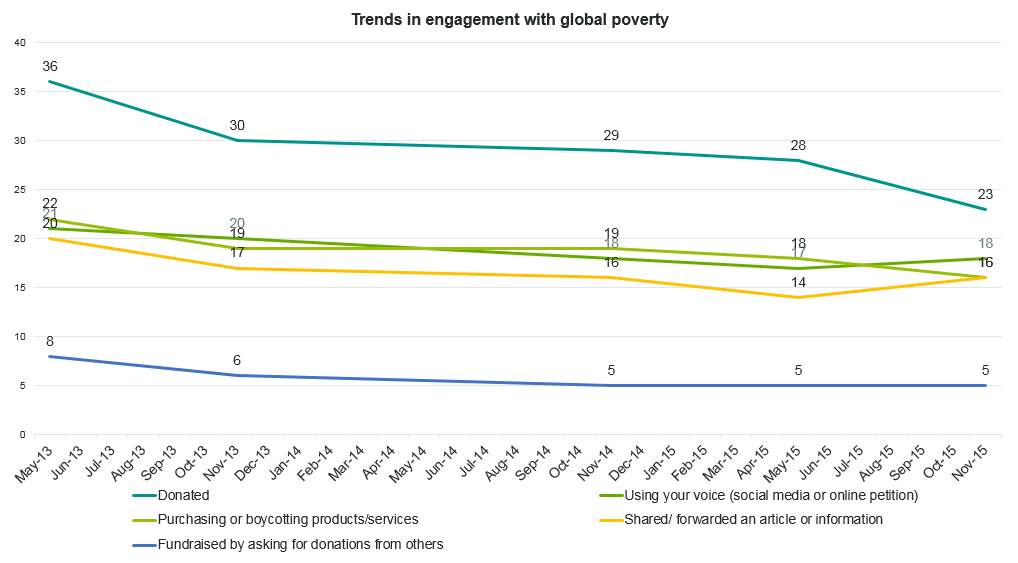 What does this mean for charities?

For a while now, the charity sector has been considering new ways to engage audiences and it’s likely that some of these challenges are familiar to others who work in the sector. Data from the Aid Attitude Tracker helps us better understand attitudes and beliefs that drive engagement with global poverty.

Understanding the underlying perceptions gives us the opportunity to experiment and test new tactics to improve engagement. It also provides us with hard data when trying to make the case for change internally to our colleagues. Other charities specialising in health, environment, domestic inequality, housing and other social issues may find it useful to track engagement and test similar tactical adjustments. Here are three examples of how the tracker’s findings might be used to inform and suggest alternative tactics for development charities.

1. People listen to their own networks – this can be used to normalise engagement with global poverty

The analysis shows that if people witness their friends, family and the wider public supporting development charities, they are likely to become more engaged themselves. Only 47% of the public agree that people in the UK respect those who do charitable work to reduce poverty and 33% agree that most of their friends and family think that fighting poverty is a waste of time. In order to improve rates of respect, organisations may wish to experiment by:

2. People want to know how their engagement makes a difference

The analysis shows that when people feel they can personally make a difference to poverty overseas, they engage more. Although marketing to donors, campaigners and volunteers often mentions the impact their support has, 73% of people believe they cannot make a significant difference. It seems the ways we currently communicate impact as a sector aren’t working. As such, organisations should try:

Looking across the 18 forms of engagement tracked, it’s possible to identify one-third of the public as ‘engaged’ and two-thirds as ‘disengaged’ from global poverty. The Aid Attitude Tracker’s data shows the engaged public are twice as likely as the disengaged public to be interested in politics/public life. Similarly, 38% of those who are disengaged believe they can have no influence at all on politics and public affairs, compared to 19% of those who are engaged. What’s more, analysis suggests this relationship is not just a correlation but a causal relationship; as people’s interest in politics and belief in their ability to influence politics increases, so does their engagement with global poverty. In order to increase the number of people donating, volunteering, buying Fairtrade and taking other forms of action on global poverty, it would be helpful to increase interest in politics and belief in ability to influence politics, even for organisations which do not have campaigning goals. We should test if:

Understanding the underlying perceptions that drive engagement with social causes, such as global poverty, allows charities to improve those underlying perceptions and in turn increase engagement. It helps us to recruit ‘new’ support from disengaged audiences, diversify the forms of action taken by the already engaged and retain supporters for longer. However, to achieve these objectives we can’t just read about these insights, we must convert them to actions.

More like this
Check out presentations from our last engagement conference 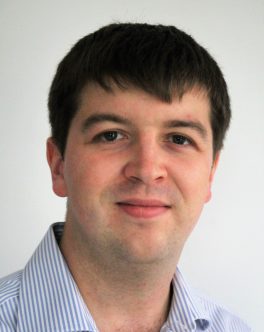 Will Tucker runs Will Tucker Consulting which helps organisations connect people to causes. Will works with organisations to identify, understand and engage key audiences; develop, deliver and evaluate campaigns and advocacy; and bring together partnerships and coalitions to achieve more together than they could achieve separately. Prior to setting up his consultancy, Will worked for VSO, Save the Children and Oxfam.